As mentioned in the last blog post, two of our CODE_n13 finalists – Codeatelier and carzapp – were invited to join Continental at the IAA, offering the startups a unique opportunity to present their business ideas at the Continental booth for two days each. I headed over to the IAA in Frankfurt on monday to speak to Waldemar Wunder, co-founder of the startup Codeatelier. We talked about his expectations for the IAA trade show, the next big steps his product “Homee” will take and the CODE_n14 Contest. 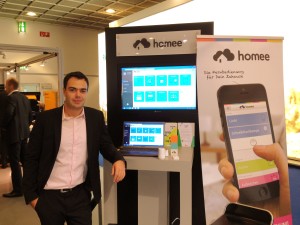 Janina Benz: Hello Waldemar, the IAA focuses specifically on the automotive industry. Your product, Homee, is a smart home solution. What were your expectations in coming to the IAA?

Waldemar Wunder: Although we aren’t from the automotive industry per se, the topic of smart homes is significant for average people – and there are plenty of them here at the show. So we see great potential for making lots of valuable contacts.

JB: Besides the IAA, what else have you penciled in on your schedule? Have you made any particular plans for Homee or considered taking any further big steps before the end of the year?

WW: We’re currently launching our products and hope to have Homee market ready by December, just in time for the holiday season. At the moment, we’re really busy with the legal development of the software, but we’re also ramping up the hardware for possible series production.

JB: The motto for the CODE_n14 Contest is: “Driving the Data Revolution.” What role might the issue of big data play for your smart home solution, Homee?

WW: Our team is always taking about Homee becoming the Facebook for (energy) data someday. The idea will make a lot of sense once devices can be networked and controlled remotely while people are out and about – once applications at home can be connected to innovations from the Internet to create significant added value. For example, Homee could measure my energy consumption while simultaneously searching the Internet for the cheapest energy supplier. I believe that a lot of new ideas and possibilities are on the horizon if we think in these terms.

JB: Talk of big data is always followed by the issue of security. If I use Homee to network all of my devices, will this create an Achilles heel for me in terms of data protection?

WW: We especially designed the system so that all user data and passwords are stored locally on devices at home, not somewhere in a cloud. As a result, there is no danger of a server being hacked, giving the hacker access to the customers’ personal user data. That said, we have implemented additional security mechanisms that large corporations use as well, and we count on those to be secure.

JB: One last question on behalf of all the applicants of the CODE_n14 Contest: How many contacts were you able to acquire through your participation in the CODE_n Contest at CeBIT?

WW: We broke these down into private individuals and large corporations. The reaction from both sides was phenomenal. Looking at the company side, we can say that we made contacts with 6 large corporations and 10 SMEs. CeBIT is just perfect for startups; it’s the ideal platform for presenting oneself and one’s ideas. Participants get exclusive access to established companies, potential partners and investors.

Find more pictures from the IAA on our facebook page.

Apply now for the CODE_n14 Contest!

CODE_n is getting big! The next round of the global innovation competition is setting its sights on business models that tackle intelligent and efficient use of large data volumes. With this year’s slogan, “Driving the Data Revolution”, the CODE_n Contest is calling startups from around the world to apply by October 31, 2013. We invite the top 50 applicants to present their big data solutions at CeBIT 2014. The winner of the CODE_n14 Award will walk away with prize money totaling €30,000.