Once a sales rep for cash registers, now a business founder: how orderbird set up a new business

If the name orderbird rings a bell, it’s probably because it was one of the ten finalists at the very first CODE_n CONTEST in 2012. The startup also now rings different bells – think ‘ka-ching’ – as one of the five most successful mPOS systems in the world. And the initial spark of genius behind its business concept is still the same today: The startup from the Berlin suburb of Kreuzberg can convert iPads into an ordering system for the catering industry. Five years after it was set up, the former CODE_n contestant is now organizing its own successful startup competition, naturally with a slant toward catering. The aim of its Gastro-Gründerpreis (gastronomy startup award) is to help lateral-thinking caterers with €10,000 of startup funding. In its third year now, the much sought-after award is bestowed at Berlin Food Week and the jury includes well-known German experts such as Christian Rach, Cynthia Barcomi, and Sophia Hoffmann.

We invited the CODE_n alumni at orderbird to join us on the occasion of our fifth anniversary and tell us about their own early days as a startup. How did its founders come up with the idea of turning an iPad into a ordering system for catering? And how did they get the right people on their side? Read more about the story of a startup – from the initial insight and inspiration to becoming a full-blown publically traded company. 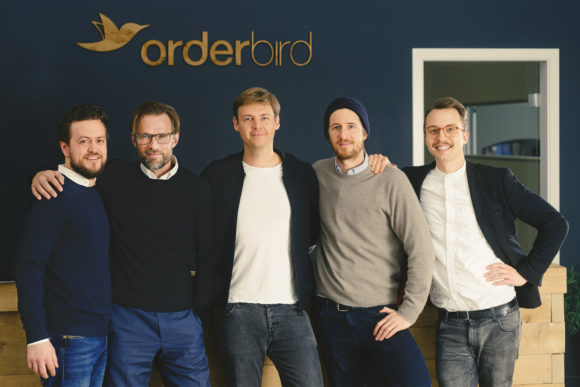 The ingenious idea behind orderbird first came to Bastian Schmidtke in 2009. He was scrolling through the Business Insider website when he read about the U.S. military using the iPod Touch as a remote control for bombs. Bastian was selling cash register systems in southern Germany at the time, and his thoughts immediately leapt to catering:

“I remember thinking, if Apple devices can be used for military purposes, why can’t they be used in catering?”

It was a case of the right thought at the right time. In 2010, Apple followed up on the iPod Touch and the iPhone and launched the iPad. So in terms of hardware, everything was now in place. An iPad could become a cash register system for cafes and restaurants – all that was needed next was the right software to convert the tablet into a full-fledged checkout. 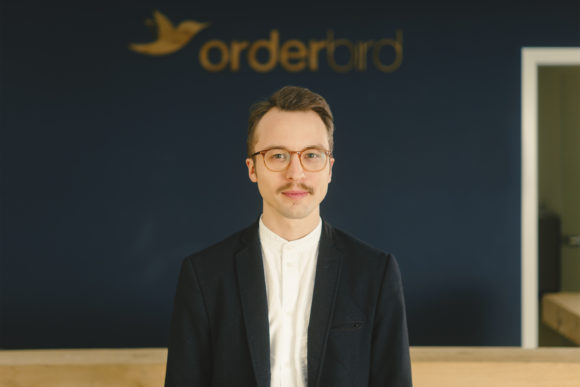 The A Team pulls together to set up a business

Bastian turned to his old school buddy Jakob Schreyer for help, and brought two more friends, Artur Hasselbach and Patrick Brienen, on board. Together, often in a shared apartment in Berlin, they started tinkering with ideas and turning a business concept into an iPad ordering system.

A baptism of fire in the entertainment and catering industry

The entrepreneurs certainly had Lady Luck on their side. By pure coincidence, Schreyer met Radoslav Pavlov, the boss of P1, the famous nightclub in Munich. The P1 owner knew a good idea when he saw one, and made the new business founders an offer they couldn’t refuse: They could test their new checkout under live conditions – at the reopening of P1. With their eyes on this prize, the team worked day and night on a fully functioning beta version of the new software. Et voilà: orderbird completed its maiden voyage with flying colors in October 2010 – despite much nervousness and many half-gnawed fingernails!

Before long, stories about waiters armed with iPhones were spreading like wildfire through the catering scene. This was the starting gun for orderbird. The company’s founders got busy developing a market-ready version of orderbird Point of Sale – or orderbird POS for short. On March 3, 2011 orderbird AG was publically traded for the first time, and shortly afterwards the first version of the iPad checkout went live on the Internet.

The company’s management team now boasts five members, with Thomas Köhl acting as COO. As for the Birdies (the people who work for orderbird), there are now 120 of them! Their task is to fine-tune new products and innovative ideas to make the catering business even more successful. Despite future aspirations, the lifeblood of the company is still the iPad checkout, so the startup has also added a brother and a sister to the family: a legally watertight guest Wi-Fi system (orderbird Wi-Fi) and an ordering and supply management system called Simple Order. In terms of the firm’s positioning, orderbird sees itself as a pioneer in cashless payment solutions. In February 2015 it went live with the first mPOS system with integrated payment options including NFC, the result of a collaboration with its strategic partner, Concardis. We look forward to seeing what the next five years have in store for orderbird and it goes without saying – we’ll keep you posted!

This article was reblogged under:  Trends and disruptive business models of FoodTech: changing the game in the food industry and our lives | CODE_n Blog