New York, here we come! CODE_n was on the road again, this time in the city that never sleeps. Managing Director Moritz Gräter and his GFT colleague Michael Wendt went on a whistle-stop tour of New York from May 9 to 13, 2017. The trip was arranged following an invitation from the organizers of the DLD Conference, which had set up a base camp in New York for two days. Aside from the conference itself, the two intrepid explorers experienced all kinds of inspiring things in the Big Apple – from tours of some captivating coworking spaces to hearing about the very latest trends at the NY Tech Meetup. There was also a visit to our colleagues at GFT USA Inc. Discover more about the trip in Moritz’s exclusive travel report. Enjoy the read! 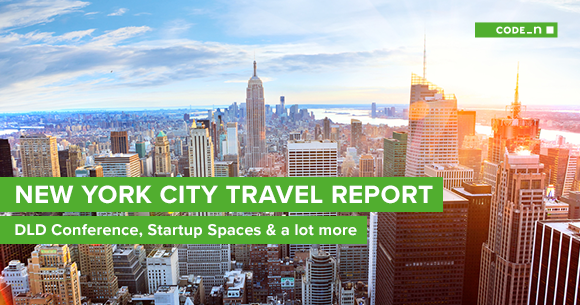 It all started on May 9 when I was joined by my GFT colleague Michael Wendt (Executive Assistant to the Vice Chairman of the Board & CEO) on a direct flight from Dusseldorf to JFK. No sooner were we off the plane, then it was straight to our digs with Uber. As everyone knows, living in New York can be a pretty expensive undertaking ;-). That’s one reason Airbnb is now the #1 choice when visiting the Big Apple – and it was for us, too! 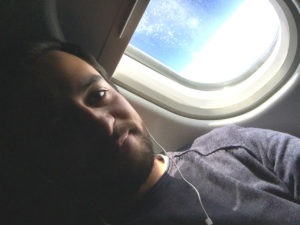 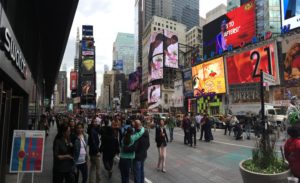 After a quick check-in at the place where we were staying with Matt, a nice, like-minded guy located in the middle of Manhattan just next to Times Square, it was time for the first highlight of our trip: a visit to the famous NY Tech Meetup! We struck gold and managed to combine our business trip with one of the monthly meetups in the NYU Skirball Theater. We were curious to see what the world’s biggest tech meetup group had in store for us – and we certainly weren’t disappointed. There were a whole bunch of amazing tech ideas, different trends, and some truly inspirational characters at the meetup. The tech focus couldn’t have been more obvious – it was actually “verboten” for the 400 or so people at the event to pose the oh-so-clichéd question, “So what’s your business model?” This was to make sure the conversation didn’t drift off into some sort of shallow interview about business concepts ;-).

#NYC here we come! #CODE_n is ready to hit @DLDConference. Surprise on board: we bring our alumni #startups w/ us thnx 2 @impulse_inside 😉 pic.twitter.com/qk0pSBtnlh

Wednesday, May 9, 2017 | Inspirational coworking spaces and a visit to our GFT colleagues

After an exciting first day we were up the next morning to enjoy Breakfast in America firsthand – yum! New York sometimes feels like it’s bursting at the seams with baristas, so we couldn’t miss out on the opportunity to grab a delicious Italian cappuccino afterwards. Fired up, we set off to a coworking space called wework. This is now a 16-billion-dollar company, showing the world how to work your way to the top by renting out office space. A real pioneer in coworking spaces, not only does it win the hearts of tenants by offering them a flat-rate beer deal, but it also feels really authentic – like it’s a special community. It’s a feeling the founders Miguel McKelvey and Adam Neumann have managed to spread to offices across the world. The New York office is in SoHo and we got to experience this sense of community for ourselves. It started with a fascinating tour of the offices, which was also a good opportunity to meet some amazing people. Next stop, a coworking space called The Farm SoHo. This place is actually a bit like a tree house with lots of wood everywhere and natural materials. We like this coworking space; it was kind of rustic, but at the same time really modern in appearance. Clearly somebody put a lot of thought into the look – nice! We were also given a captivating tour of The Farm SoHo, with some interesting encounters and conversations. Thanks again to wework and The Farm SoHo for the great hospitality! 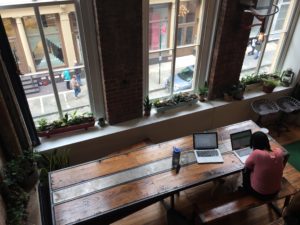 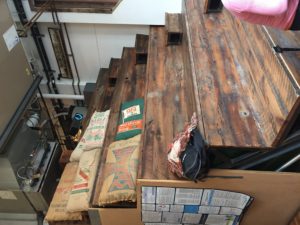 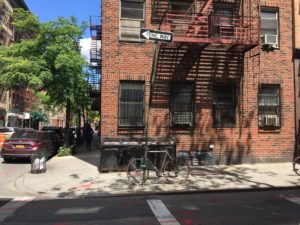 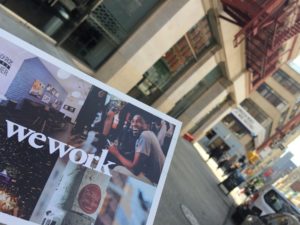 Our next stop was a visit to see our colleagues at GFT J. We got a warm welcome to the GFT’s New York office from JC Fonoll, who invested plenty of time in showing us around. And what better way to round off the visit than sipping an after-work beer and looking over the roofs of New York. But to really crown it, we enjoyed a delicious dinner at The Fat Radish. Since it’s a farm-to-table restaurant, we had a chance to try some local produce. It was heavenly – and healthy to boot!

Exploring #NYC w/o sneaking into the office of our GFT US colleagues? No way! What a view ? Thnx 4 having us! #Finnovation#CODE_nOnTourpic.twitter.com/ySehoNaECW

Then it was time for the big event on Thursday: the DLD! Things got underway at eight in the morning. The agenda looked promising, with a number of talks and panel discussions, and as it turned out, we picked up some amazingly inspirational ideas as the day unfolded. One thing that really stood out was the panel discussion in the morning on the hot topic of fake news. The title for the session was “From Fake News To Strategic Disinformation” and the discussion involved representatives from The New York Times, Betaworks, Storyful, and Deutsche Welle, who talked about the impact of contemporary reporting. Aside from fake news, of course there was also a Trump topic on the agenda. Tammy Haddad and Megan Murphy entered into an extremely clever discussion under the banner “100 Days Later – Is The Elephant Still In The Room?”

Between sessions, we got to know a whole bunch of riveting startups. There was a Seven Venture Pitch Day, which was moderated by Mike Butcher from TechCrunch, and there were several cool business concepts. Afterwards there was a talk by Jeff Maisel of the Maisel brewery, who shared some entertaining insights into the working day of a brewery in his speech on “Craft From Bayreuth: German Brewer With Passion, Heart, and Soul.” 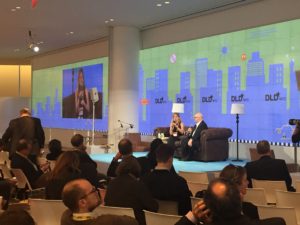 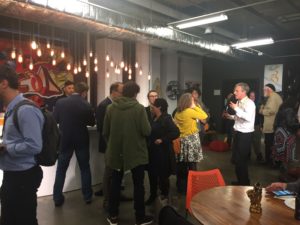 Other highlights of the day included a session by the war journalist Julia Leeb on the use of VR and 360° reporting in war zones, and a talk by Konstanze Frischen, who was representing the Ashoka Support Network and examined the question, “Can Social Entrepreneurship Make America Great Again?” After a day crammed full of gripping sessions and many absorbing conversations, the official program drew to a close and it was time for the after-show party at the Innovation Spaces of Amazon Web Services. Everyone relaxed, soaked in the laid-back atmosphere with some delicious drinks, and got to know each other. What a perfect finish to the DLD! But of course New York wouldn’t be New York if it didn’t have a surprise or two up its sleeve. On the way home we just happened to come across a cool bar in the East Village where they were playing live music. Couldn’t miss an opportunity like that. So we had one for the road and listened to the most awesome jazz played by a big band.

On Friday, we were set to go and enjoy the last day of our trip to New York! An important item on the schedule was of course a visit to the legendary SoHo House New York. There was no way we were going to leave New York without taking a look around this amazing hotel. This is the place where anyone who’s anyone meets up, including the big names in the startup scene. We were only there for a short time but we managed to pick out a few well-known faces. After enjoying coffee in the roof garden we were well and truly wowed. Time to move on to a meeting with the VC company Work-Bench. Kelley Mak took us through the mission statement of the enterprise-focused venture fund, which also gave us an opportunity to talk about possible collaboration options with CODE_n. 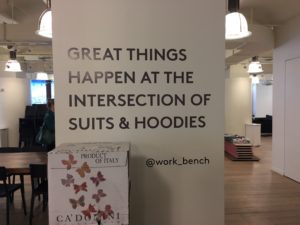 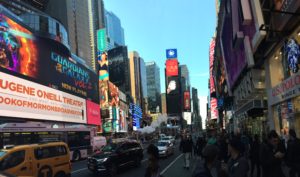 To round off the day, there was a particularly amazing experience waiting for us. We were looking for one of those cozy bars for a final drink in the city that never sleeps when we stumbled across a very special location. Hidden away in a backyard in the East Village, we discovered a Prohibition speakeasy – a bar in the backroom of a building fitted out in real 20s style. The setting was so authentic, we really felt like we were back in the New York City of Al Capone, surreptitiously sipping on a final cocktail. Just as it should be, they would only serve them in coffee cups ;-).

Then it was Saturday and time to fly back across the Big Pond, home to Stuttgart – after four unbelievably inspirational days, we were full of fascinating insights into the startup scene in New York, industry trends, and some imaginative concepts for coworking and collaboration. We came back with plenty of inspiration for our own work and CODE_n SPACES and are look forward to future projects with our new business partners. Big Apple, we’ll be back :).

An inspirational week in #NewYork comes to an end. Had a great time – now back to Stuttgart #CODE_nOnTour@CODE_npic.twitter.com/8zAkaveCDl

CODE_n is moving forward. As the Managing Director Moritz is sitting in the driver’s seat of CODE_n. Together with his team he is on the road to find the Code of the New. Establishing an ecosystem with creative minds, inspiring startups, leading corporations and experienced entrepreneurs which help to pioneer new business models is the goal he is heading for.