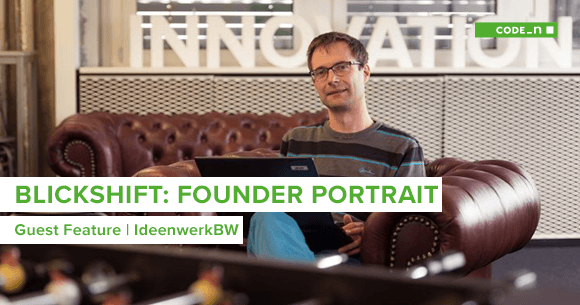 Michael Raschke, from the Stuttgart-based startup Blickshift that analyses gaze behavior, benefits from the fact that the disruption in the car industry is posing completely new questions.

Michael Raschke was far away from Stuttgart, at a science conference in Santa Barbara, California in 2012 when he realized that the car industry could be his future. “I had been invited to give a talk on the topic of visualization – and a representative of a car company came up to me and said: You have just the ideas we need!” He does not name the company. The approach in Baden-Württemberg, a haven for innovation, is apparently not quite as open as it is in Silicon Valley.

The technology that has given rise to Stuttgart-based startup Blickshift since 2016 was actually supposed to solve a scientific problem. Raschke had been a doctoral student at the prestigious Institute for Visualization and Interactive Systems at the University of Stuttgart since 2009, dealing with human gaze behavior. “And we found that we could not answer our questions using existing analysis systems,” he says. The data produced when capturing gazes was supposed to make things transparent and understandable by means of optical processing.

A driver’s gaze behavior has always been a key issue for the automotive industry. Yet with the issue of automated driving, it began to drown in a sea of data as the interaction between human and vehicle had to be studied much more intensively than before. “They did driving experiments with sometimes more than a hundred test subjects, who spent many hours in the car,” says Raschke.

His analysis tool for gaze behavior came at just the right time: The automotive industry is hungry for new, often very specific IT solutions. And all of a sudden, a startup like Blickshift is highly interesting. This disruption is a huge opportunity for Raschke and his two co-founders. The writing had been on the wall for a long time that he would switch from scientist to founder. Raschke had already taken part in a company founder course in 2006 at the University of Stuttgart-Hohenheim during his studies. “I simply wanted to know how it all works,” he says. First the desire to found a company, then the team and then the specific founding idea – that was the order, which is also typical of many startups.

Michael Raschke is fascinated by teamwork

“When we founded Blickshift, we first asked ourselves the question: Why do we want to do this?” says Raschke. “For me, I had always been fascinated by working with other people on a project.” His two co-founders were driven by somewhat different things. His colleague, who had already worked as a software developer during his studies, was looking for creative freedom. And founder number three? “He said: Everyone thinks reasons are good and important. But someone has to actually do it in the end,” says Raschke.

He found that the openness towards creative, enterprising types like him and his team has increased in the automotive industry. “These days, the big companies know that it makes sense to work with people who can think laterally.” He says that you meet an increasing number of managers at networking events: “The Board members are very interested and open. This has changed in the past five years.”

The startup hub of Stuttgart has blossomed

As he was starting to look around the Stuttgart startup scene in 2011, the “founder barbecue” was still the only regular event: “I sat down on a wobbly beer crate and presented my idea.” Today, there are countless events of this kind. In 2016, Blickshift took part in the Startup Autobahn initiated by Daimler, for example, where people could get together with automotive industry experts to fine-tune their own products as part of a program spanning several months.

Michael Raschke is an optimist, precisely because he believes that the path to truly autonomous driving will be rocky and longer than many others believe. Blickshift, in fact, profits particularly from the transition period in which humans and cars still have to adjust to each other. This is due to the fact that it is extremely important to know where the driver’s eyes are wandering to when the automation has taken over several functions, like keeping distance and within lanes. But he also sees many perspectives going forward. Raschke believes that, once the driver’s gaze has been freed from having to look at the road and can roam around the various forms of entertainment and other distractions in the car, a precise analysis of gaze behavior will be even more important than it is today – for example for optimized interior design.

The best place for innovation in the automotive sector

Stuttgart is the best place in the world for physicists and computer scientists to advance all kinds of automotive technologies. “Wherever they live here, they always have two or three neighbors that have something to do with the automotive industry.” He himself was born in Bad Cannstatt, has roots in the region and also does not wish to move away any more than his co-founders do. In Stuttgart, Munich and Ingolstadt, automotive manufacturers are within easy reach who see themselves as global technology leaders. Southern Germany is something akin to the Silicon Valley of the automotive industry: Countless events nowadays mean that it is easy to make contacts with customers and experts.

He doesn’t want to be an egomaniacal world conqueror, but a partner: “It’s great fun to work with the automotive industry professionals in this disruptive phase,” he says. “I admire German engineering, the diligence, that everything is secure.” This is why he believes that, despite rapid progress and all the slogans of the so-called “disruption” and the startup culture, there is still a place for a company philosophy so typical of the region.

“Step by step” is his motto. “Currently, our focus is on building up sales and developing our products further. We sometimes speak with investors. As a startup, we are, however, more in favor of the Swabian tradition of southwestern Germany.”

For now, a small office at the CODE_n Innovation Campus in Stuttgart-Fasanenhof is sufficient for the three team members of Blickshift. “We are constantly developing things. We have to solve everyday problems, find customers, secure the cash flow – we can’t always address the big meta-questions.”

Of course, potential investors or buyers do drop in every now and again and leave their business cards: “We listen. Say thanks. And carry on.”

The startup does not depend on the ups and downs of the automotive industry anyway. Blickshift’s technology has possibilities way beyond the automotive sector, perhaps as an analytical tool in medicine or market research. Looking with one’s eyes is also increasingly becoming a method for controlling computers and other devices. A company that understands how to process data on human gaze behavior is therefore looking to the future – one way or another.

NOTE: This article was originally published by IdeenwerkBW.

Andreas Geldner is a journalist and startup expert for Baden-Württemberg. He manages IdeenwerkBW, the leading webpage for news about innovation in South West Germany.