CODE_n14 finalist Graphmasters: “We make individual decisions for every driver”

The team behind Graphmasters, a young German company, has developed an internet-based traffic management solution for navigation devices that helps drivers avoid traffic jams. They claim to be the first company providing individual routes and decisions for every driver. Christian Brüggemann, one of the founders, explains what sets his company apart from the competitors.

CODE_n @ CeBIT took place at the beginning of March – several weeks have now passed. How did you experience your time at CeBIT and especially the weeks after? 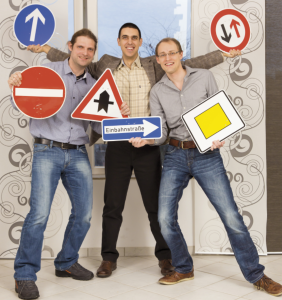 CeBIT was a great opportunity to meet potential new customers. I was really surprised by the quality of the discussions we had at the booth. The week was packed but nonetheless fun, and it certainly helped us a lot in the long run. After CeBIT, we have had many follow-up meetings and have now started projects with some of our new customers.

You have developed a traffic management solution. How do you gather the necessary data? And how do you use it for your business model?

At Graphmasters, we believe that the only way to optimize traffic flow is to prevent traffic data from being broadcast. Whenever traffic data is broadcast through a channel over the internet or radio, navigation systems use it to recalculate alternative routes, so decisions are made on those individual devices. But with all devices making decisions based on the same data, this has an impact on further traffic jams. Ultimately, one could argue that live traffic data becomes worthless as soon as it is broadcast. That’s why we gather anonymous data from client devices using our service and do not broadcast it anywhere. Instead, we make individual decisions for every driver based on the data we’ve collected.

Who is your target group and how might they use your innovation?

Our target customers are companies that provide navigation solutions to the consumer market. This includes, for instance, navigation system providers but also car manufacturers or their suppliers. Furthermore, we create traffic solutions for fleets of delivery companies. Our innovation will get people through traffic about 20% faster thus saving a lot of time, stress, and fuel. This contributes to a cleaner environment by actively preventing traffic jams.

What sets you apart from your competitors?

All current navigation systems react to changing traffic conditions. This has worked in the past, but nowadays more and more people are using such navigation systems. The problem, however, is that everyone is redirected around a traffic jam along the same route. This just shifts the traffic jam from one place to another – it actually makes the traffic flow worse than it was before. We are the first company to provide individual routes, thereby spreading the traffic evenly. Compared to standard systems, we can make traffic nearly 20% faster. During peak times, it’s even possible to double the speed of each driver.