“Share your journey with people” | Daimler X incubator, Project A and startup pitches

Get inspired by GFT! – for the second time, GFT invited guests to its Inspiration Day. This time the event was held on June 29, 2017 at the GFT Campus under the banner of impulse. inspect. ignite. The motto was a call for new, entrepreneurial mindsets and practices in a digitalized world. Inspired by art, culture, and design, genuine experts sketched out their vision of what the future holds. In addition to presentations by Google and Dropbox, one highlight of the event was the introduction of Daimler X with the new CODE_n resident Mercedes Benz LAB 1886 – Daimler Incubator Europe. For several weeks now, Matin Ebrahimchel and his team have been busy here at CODE_n SPACES, leveraging startup techniques in Daimler’s in-house innovation factory with the aim of bringing promising ideas to fruition. Another feature on Inspiration Day was also a special goodie for the startups located on the CODE_n Innovation Campus – the Berlin-based venture capital investor Project A was in town and gave the teams some valuable tips in an exclusive Office Hour. Find out all the fun details and background information on this exciting event – we hope you enjoy the read!

At this GFT Inspiration Day, the program took a deep dive into digital transformation and cross-sector disruption. Panel discussions looked at hot topics like “Artificial intelligence – the key to a better future” (Hans-Christian Boos, arago), “Cybersecurity needs a new approach” (Dr. Sandro Gaycken, Digital Society Institute), and “Hey, what about AI? Shaping the future of digital banks” (Ignasi Barri & Antoni Munar, GFT Spain). Together, they treated the audience to their road map of the future. In a talk titled “Business 4.0 – the second half of digitalization,” Professor Wilhelm Bauer, head of the Fraunhofer Institute for Industrial Engineering, urged his audience not to view digitalization as a wave that is currently threatening to sweep everyone away, but as a development that is being driven by all of us – a man-made phenomenon. “At the end of the day, it’s each and every one of us who decides what will happen in the future,” said Professor Bauer.

And just how are pioneering digital corporations handling the rapid pace of change? Product strategist Jens Redmer from Google Deutschland provided insights into the radical approaches of the pioneering company in his talk, “Dare to be audacious!” “Allow disputes” is one of the principles aimed at ensuring that the billion-dollar company keeps asking questions and doesn’t lose its capacity for reflection – despite its size. For example every Thursday all employees, from intern to executive, have a chance to ask questions and make suggestions to the founders of Google.

Furthermore, Google fosters employee innovation through its 20% rule, which applies throughout the corporation: Every employee is allowed to spend up to 20% of their work time on projects that have nothing to do with their regular responsibilities. This approach has already borne fruit; for example, it gave birth to the news aggregator Google News. “Disruption is a fact in every single sector,” asserted Jens Redmer, and called on people not to bury their heads in the sand or hope that digital transformation won’t cause an upheaval in their industry – because it will. Definitely.

“Disruption is a fact in every single sector,” Jens Redmer (Google Deutschland)

Oliver Blüher also provided a glimpse into the workings of a successful digital corporation. His talk looked at the journey taken by Dropbox, which went from startup to 500 million users and 1 billion dollars in just 10 years. He also shed light on how consumer IT is now setting new standards for the enterprise IT sector.

At an event called “Born to be… innovative & wild!” that had the SPACES Lounge bursting at its seams, the startups of the CODE_n Innovation Campus had a chance to pitch their business ideas. 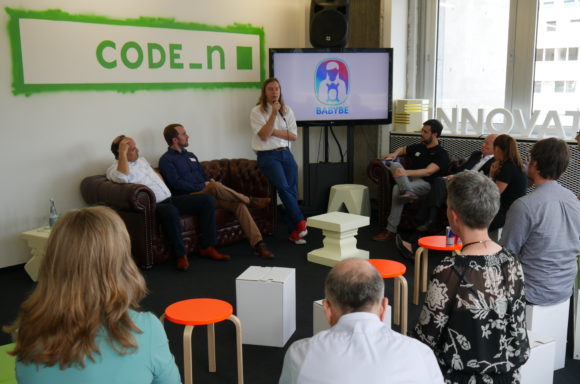 At the end, Matin Ebrahimchel took the stage to announce the official launch of the Daimler incubator Mercedes Benz LAB 1886. Located at CODE_n SPACES and active for several weeks, the automaker’s new innovation factory was presented to the public for the first time at Inspiration Day. A spinoff of the company’s Leadership 2020 initiative, this venture builder marks the launch of an agile and rapid process for leveraging the powerful innovative force within the corporation and transforming it into viable business models. “There are lots of great ideas coming out of our departments, but they often fail to get implemented,” explains Matin. “We make, not buy,” is Daimler X’s mission. And Mercedes Benz LAB 1886 is operating as an independent unit with the greatest possible degree of freedom – within the parameters of clearly defined processes and targets. After three months, predetermined KPIs will be used to decide if an idea is promising and should be pursued further. Although the initiative was just founded in February, Matin has already set up a team of more than 25 talented professionals – which is extremely fast compared to the usual corporate timeline! And the venture builder is also looking to go its own way in terms of culture. Matin is convinced that personal fit is the most important factor in hiring new employees – and that it’s essential for everyone to be committed to the same idea. “We’re sharing our journey with the people,” said Matin. Of course in some cases they still might decide to part ways if things don’t work out. In any event, the HR development process is in full swing and keeping pace with the speed of the startup world, with a new salary system having been developed in just six weeks. Soon we’ll post another detailed report and interview on how things are going with Daimler X – watch this space! 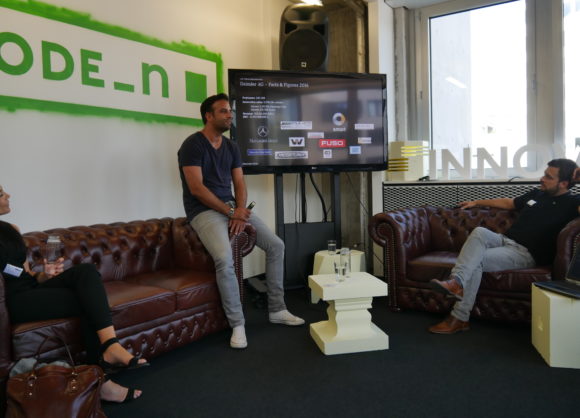 At the following Design Thinking Workshop at CODE_n SPACES, the eager guests could enjoy an up-close-and-personal look at innovation methods and had a blast trying out the technology.

On the morning of Inspiration Day, CODE_n SPACES resident startups also had a unique opportunity to get some individual advice on funding and venture capital from Andreas Helbig of Project A.

Prior to #GFTinspires#event@ProjectAcom took the time 4 an individual #officehour for our #startup residents. Thanks a lot 4 the feedback pic.twitter.com/9Y9ZJXRciY

And that afternoon, Andreas took to the CODE_n stage to shed some light on the Berlin-based venture capital investor’s funding activities and areas that are particularly attractive to the firm – which include fintech, digital health, edtech, Industry 4.0, and B2B markets. The latter are especially widespread in southern Germany, making Baden-Wuerttemberg an exciting region for investment. “We’re very much interested in exploring contacts within the region – we think that the market has huge potential,” he said. Spin-offs founded by engineers from industrial enterprises are on his firm’s radar, for instance, as offering an attractive counterpart to the Berlin hipster ethos in the B2C segment.

Talking about hot topics, these are @ProjectAcom‘s points of interest in the field of #startup#investments#tech#innovation#GFTinspirespic.twitter.com/JZXnp9xxur

As the grand finale to an exciting day rich in new ideas, GFT founder Ulrich Dietz held an inspiring speech highlighting the utility of things which might appear pointless – concepts that are instead sources of creativity and innovation. Questioning the status quo and venturing off the beaten track gives birth to new ideas – making forays into unproductivity necessary from time to time. A visionary mindset, and one that led to the founding of CODE_n in 2011! Be sure to take a look at all the photos of the event on flickr.

Closing of a successful event! Ulrich Dietz holds inspirational speech on how to open up for innovation. “Stop talking, do it!” #GFTinspirespic.twitter.com/rMrjKambPJ