Finalist | OptoForce (Hungary) - Sensors for the Internet of Things 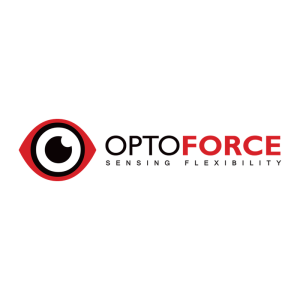 OptoForce, our Industry 4.0 finalist from Hungary creates 3- and 6-axis sensors based on a novel optical principle using silicone as a base material. The technology enables OptoForce to build sensors at a fraction of the usual cost. Ákos Dömötör, Chief Executive Officer, told us more about the complex method that OptoForce came up with.

Where did your idea for the company come from? Tell us a bit about the company’s founders like their professional or industry background and the origins of the founding idea.

Ákos Dömötör (OptoForce): Our two founders, Ákos Tar and József Veres used to be dormitory roommates when they were studying bionics and robotics in the same class at university. They started a pet project just for fun: building a two-legged robot. They faced many interesting issues and so when they started their PhD studies, they decided to keep developing the robot. One of the focus areas was to do with the senses: when you are balancing a robot on only two legs, you need to know exactly where the center of gravity is – in other words, how the weight of the robot is distributed on the feet and if the feet are being pushed to the sides. So they needed to measure forces acting on the leg along the X-Y-Z axes.

The standard answer for such a problem is to use a strain gauge sensor, but as these cost well above 3000 euros this was not an option. Lower-cost sensors could only sense forces in one direction and they were not robust enough either. So the guys looked for another solution. The first idea was close to how a computer mouse works: using a camera to detect the changes under the leg. This could detect sideway movements but not the weight on the legs. So they developed a layered structure in which silicone would actually change its form more under a greater load and this made measurement in all directions possible.

A picture showing the technology: 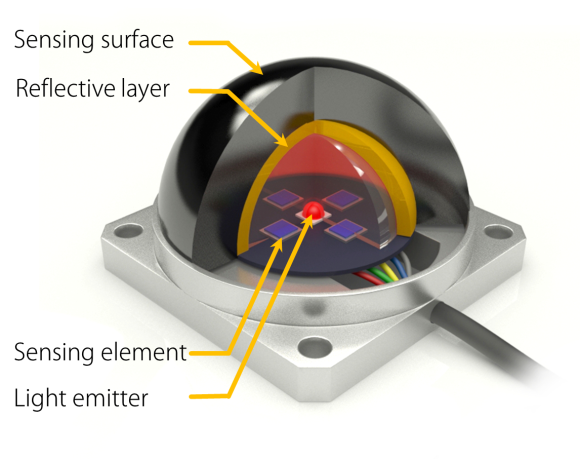 Ákos Dömötör (OptoForce): Hardware development is a long and costly process and since we wanted to get as much feedback as we could from real customers, we deliberately chose to go through the well-known innovation adoption curve. We consider the best candidates to be “innovators” in the advanced robotics segment: research institutes working on mobile robots, robotic and prosthetic arms, and medical instruments.

As we saw quite a bit of traction here, we managed to establish our first contacts to our intended “early adopters”: industrial robotic companies and makers of top-of-the-range medical instruments. In industrial robotics, the main challenge our customers face is to adapt robot movements to the shape of the parts. In the medical technology field, our customers create products that measure how stable someone is standing up, or moving their feet on the sensors.

The next step for us is to build a sensor “for the masses.” We are now ramping up to be able to sell at lower prices so that our sensors can be used in other fields of industrial automation and in amateur projects – as well as in the first B2C products developed by our partners. Later on, we expect that most of our sales will come from the rapidly expanding home robotics segment and consumer electronics. For example we see major potential in using our sensors as a very robust and yet sensitive and fast joystick.

You are, literally speaking, developing the senses of the Internet of Things: the ability to feel pressure and force. To humans these feelings are natural, as they experience them every day. Which specific challenges where you facing when developing these sensors? How did you create a data system for your sensors to refer to?

Ákos Dömötör (OptoForce): We’ve faced many challenges. The first was to miniaturize the sensor and at the same time increase its capacity so that it can measure higher loads. Accurate measurement was also quite a challenge and we needed a lot of experimentation to get the structure and the materials right. We pre-process the data on our own data acquisition board so that our customers always get reliable measurements. We use industry standards (e.g., UART, USB, EtherCAT, CANopen and I2C) to communicate with other devices.