Corruption Trak: "At CODE_n we met a lot of people and realized the giant we are dealing with which also forced us to rethink our strategy..."

Michael Hehn: Hello Ishan! On CODE_n 2012, you were the participant who traveled the longest distance to Hannover. Could you please tell our readers from where you came, and which idea you brought with you?

Ishan Agrawal: We came all the way from Singapore to CeBIT for CODE_n 2012. We had been working on a not-for-profit to fight corruption in India. We call it Corruption Trak. It is a technological solution to the menace of corruption. People can report cases of corruption by filling up a simple short form to talk about details of corruption incident. We then try to channel this data to the relevant authorities so that action can be taken on these reports. 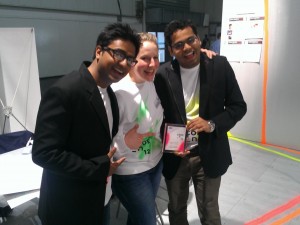 MH: Your platform is easy to use, and it is without controversy that corruption is a major problem. Still, the number of submitted reports is not very high so far. Do you have an explanation for that?

IA: The bigger the problem the tougher it is to solve, and a problem like corruption involves dealing with the government as well as educating the citizens. At CODE_n we met a lot of people and realized the giant we are dealing with which also forced us to rethink our strategy. Instead of going right in and publicizing the platform for getting more reports we have decided to gain strong support first, with external organizations and the government agencies of India, so that we can make full use of the reports on our website. We want to close the loop with people reporting and their reports being heard and acted upon instead of us just being a data collection tool, which by itself would be great as well though. After CODE_n we are spending our efforts towards this goal, so hopefully in the near future you can expect some interesting news from us.

MH: I was crossing the Russian-Mongolian boarder by train this year. For me it worked without problems, but others reported later that they were more or less forced to to buy a $10, worthless “health insurance” to get the stamp in their passport. Later I found several blog posts mentioning similar incidents. How could Corruption Trak help here?

IA: As I mentioned earlier, the scale of the problem is too big to tackle all at once. Once our tool is used to its full capacity Corruption Trak can certainly help in the case mentioned. A case reported could be acted upon by the local authorities or at least make the problem known and evident, thereby forcing the authorities to take some action.

MH: Only very few countries are nearly corruption-free, according to Transparency International´s 2011 Corruption Perceptions Index. Are there plans to start your service in additional countries and help fighting corruption also there?

IA: We definitely are thinking of keeping ourselves as a globally used tool as the technology itself is generic enough for its international use. We will open our versions for other countries as soon as the time is right and we find the right people to take this movement forward in their own country.

MH: Corruption Trak is non-profit. How do you cover your costs, p.ex. for hosting or for event participations like CeBIT?

IA: Being students comes with its perks. Our school has been supporting us so far and the rest has been our own expenses. We think even if we have to spend some from our own pockets, it is worth the change that we want to see. It’s a small price to pay for all the possibilities that Corruption Trak brings with it. That being said we are looking at a more sustainable approach to go forward. We think the key is to focus on our relationships with other organizations for support.

MH: Did you profit from the huge media attention for your project during CeBIT to find partners? Can we expecting major news in the next couple of weeks/months?

IA: We definitely did. Although our main market is India and the press has more been in Europe, it has benefited us in validating the concept and we have gained a lot of credibility and trust when the media from different parts of world appreciated and praised our efforts and the product we are building. It definitely was a great start for building all of our future relationships.

We have been quietly working these months, and we are expecting some results soon. We would definitely inform the amazing CODE_n community first thing of any exciting news that is worthy sharing.

MH: Are you able to balance both the Corruption Trak project and your career plannings? I think you were students when developing the platform, but are about to start working (or even already did so).

IA: It has been the toughest thing definitely. I am still in school while my other 2 co-founders have started working full-time. I think we still are able to take time out to work on Corruption Trak out of our sheer passion and hope to see things change. I wish I had the luxury to work on it full time, but we have been trying our best. Definitely having 3 people in the core team helps, as we can distribute work and leverage on everyone’s networks.

Ps: We really miss being at CODE_n and all of the wonderful people we met there!!

Michael Hehn is responsible for Marketing Technology for GFT