Meet our CODE_n SPACES Resident blickshift! The spin-off from the University of Stuttgart develops software for efficient analyses of the eye movement behavior. Their product, in short, enables the automotive, marketing, and gaming industry as well as the usability research to develop new applications and services based on eye tracking technology. We talked to Michael Raschke, one of the three team members of blickshift about his vision, entrepreneurship in general and the decision to move into our CODE_n SPACES:

Let’s start out with the obvious: Can you explain, in lay terms, maybe with a couple of nice examples, what exactly you do?

Michael: Sure. Imagine you’re interested in finding out how people actually read an illustration in a newspaper. So you show ten people an illustration and ask them a question about it; then you draw their eye movements. A handful of standard techniques already exist for this type of analysis, and, in principle, you can use them as they are. But the moment you need to analyze the information in more detail and find out how specific individuals looked at the illustration, or whether there are groups of people who tend to look at it the same way, these techniques show their limitations. Or it takes an eternity to evaluate just a small experiment. We’ve developed a solution that sidesteps these disadvantages, allowing for extremely efficient eye movement analysis involving a large number of people. In essence, it’s based on the use of big data analytics in combination with highly interactive visualization techniques. 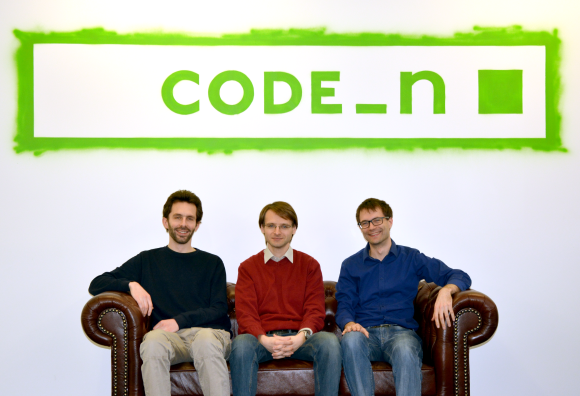 And who’s your solution for?

Michael: One example would be the car market. Imagine a situation like this: You’re driving down a road and you get to a really busy intersection with lots of people in cars and on motorcycles, and even pedestrians. And then there are road signs and traffic lights. Car companies want to know about drivers’ eye movements in such situations, so that they can evaluate them and adapt their driver assistance systems to better match the driver’s perceptions. The idea is to warn drivers about dangers they may not have noticed or perceived properly. So, for example, there might by a pedestrian who’s just about to cross the street and was almost overlooked. Car companies, their suppliers, and research institutions are carrying out tons of eye-tracking experiments on this at the moment.

This involves recording the eye movements of between 50 and 100 people in different situations, then analyzing the results and translating them into driver models that can be applied to vehicles further down the line. The analysis takes up a huge amount of time.
If you think about semi-automated or even fully automated driving, which the carmakers tell us will happen, they won’t just have to evaluate 50 or 100 guinea pigs, they’ll have to evaluate thousands, if not tens of thousands – just to allow for the development of extremely reliable driver assistance systems. Where we come in is when it comes to efficiently evaluating data from as many test drivers as possible, with just a few clicks of the mouse. At the moment, lots of things have to be done manually. Data has to be exported out of one application and imported into another. Lots of programs have to be written just to answer specific questions. This takes up a huge amount of time, so it’s very expensive. Also, it’s easy for errors to creep into the analysis. Our startup offers a solution to such problems.

Michael: Our idea came together in lots of little steps. Let’s start with the team behind the idea. We were all studying towards a PhD at the Institute for Visualization and Interactive Systems (VIS) at Stuttgart University. Michael and Bernhard had already known each other from working toward their software degree in Stuttgart; I came to Stuttgart for my PhD. It was the spring of 2014 and we were just starting to talk about what we wanted to do when we finished our PhDs. Michael had already been self-employed and I had run my own company as a sideline while I was doing my PhD. We both knew that we wanted to remain self-employed. And Bernhard just really wanted to get into business.

And, of course, then came the next question: what kind of company did we want to set up? To answer that, we used a business model canvas. We entered all the areas where we already had know-how, the things that would interest us in the future, and, most importantly, what types of markets would be of interest for us. The results showed us that we wanted to integrate a technique for analyzing eye-tracking data – something we had already been working on at the institute – into a commercial product.

After doing the business model canvas, we drafted a first version of our pitch and showed it to a handful of people. The key task was to write an application for a startup grant under the EXIST program. It’s like the must-do path taken by PhD students or other students who want to set up a company at a university. But in parallel to this, we were involved in a research project with a major carmaker from southern Germany and we were developing a first prototype for our software and testing was going extremely well. When the application went off to the project sponsor in Jülich, we started pitching our idea to potential investors. We did this primarily because we wanted to get more feedback on our startup idea, but we also wanted to forge as many contacts as possible on the investor scene right from the very beginning.

We then went live with EXIST on June 1, 2015. At the same time, we got started with product development and looking for new contacts to customers. Our startup went through TTI – a company based at the University of Stuttgart – for our first project. TTI is truly unique to the university. It’s a company that allows university scientists to conduct business through its various departments. It was a really convenient way to just get to know business processes and it offered us a lot of security.

How did you become aware of CODE_n SPACES? What motivated you to move in?

Michael: I met Andrej at an event in June of last year, and he told me about Spaces and invited my to drop by and take a look – which I did. And I really liked it. The next time I brought the whole team along and we pitched our startup idea again, this time to Moritz and the whole team. Yeah, and then we move in on February 1. Awesome! It’s just so great for us to be a real part of this!

There were a number of reasons for us moving in. Firstly, we just love the concept – with the corporate people up on the third floor and us startups below on the second floor. That just creates so much potential and it has allowed us to get in touch with so many high-ranking managers at big companies Then there’s the CODE_n team itself. We’ve had so much support with so many different things, right from the beginning. We can just walk down the hall and say, hey, what do you think of this, or what about that? Then there are all the events they organize for CODE_n. These are really interesting for us in terms of marketing. We get a chance to present our startup and our products at each event.

What are the biggest challenges you all face as business founders? What are the advantages?

Michael: There are lots of challenges. And when you’re setting up a business there’s no point pretending there aren’t. Being an entrepreneur means starting at the beginning, where there’s nothing. Something that left a particular impression on me is the fact that being a business founder means making decisions every day. At the beginning it can be quite stressful because you don’t yet know all the consequences of a decision. As time goes by, you get used to it and you develop techniques for making the best possible decisions at any given time. The approach we like to use is to first collect as much information as possible regarding a specific decision and then to try to make it transparent for everyone in the team. Then we balance the pros and cons and make our final decision.

On the other hand, being a business founder can also be quite intoxicating. Every day you feel like you have the potential to change the world. The three of us keep going about our business, always guided by our initial vision. Time and again we’re absolutely thrilled when our customers (or potential customers) tell us that we’re doing something they’ve been wanting for years. That’s when I realize that investing all that energy is truly worth it and that we can genuinely make our mark in the world with our product and our company.

Where do you see yourselves in 10 years?

Michael: That’s a tricky one, and we’ve often asked ourselves that. It depends a lot on to what extent eye-tracking technology catches on. We always like to highlight the dual nature of our business model. On one hand, this is what we like to refer to as a “Swabian” startup, which sort of implies a more conservative approach. In five years time, we still want to be writing highly innovative software and we still want to be steering the company in a given direction. But we can also expand on that model. That would be reflected in our Berlin startup. Because if we can demonstrate just how innovative our algorithms can make eye-tracking technology in the future, this could result in plenty of additional business models that could easily be developed in the footsteps of this technology. Based on that scenario, we see ourselves as more of a platform provider. We still haven’t decided where our company should ultimately go. Right now our first goal is to make the software available to our customers, providing them with viable options for reliably and efficiently evaluating their data.

Michael, thanks so much for taking the time to talk to us! We’re absolutely sure you will figure out the right track for blickshift! 🙂

This article was reblogged under:  Best creative thinking techniques - 3 tips to generate great ideas and how to put them into a business model | CODE_n Blog