What is LightFab all about? How did you come up with the idea?

Jens:LightFab uses the photons from the fs-laser and the bits in a CAD-file to produce 3D glass things with revolutionary design freedom with the large precision and speed of the LightFab 3D Printer.

Starting about 2005 during our research time at RWTH Aachen University we experienced how the fs-lasers got rapidly faster (MHz) and more powerful (>100W) and it became clear to us, that we need faster digital beam moving systems to get the lasers’ power on the road. Thus, we developed a combination of 3D beam scanning system with micro focus including various modules for extreme high speed deflection. We demonstrated the scaling of the 3D glass printing process using our new high speed microscanner: With a tailored mass production machine we can produce 3D glass parts at costs only known from molded plastic parts. That was the time to bring this technology into the real world and to start LightFab. 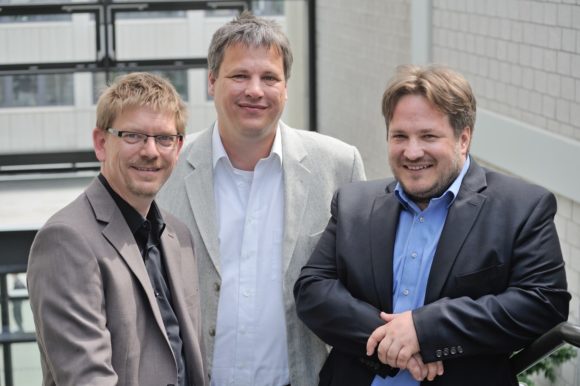 “Digital Disruption“ – that’s the motto of this year’s CODE_n CONTEST. What makes your solution innovative, what makes it disruptive?

Jens: The 3D glass printing process is new and our Prism Awards winning LightFab 3D Printer is the fastest laser machine for this process. With our tailored mass-production machines we enable the production of millions of identical 3D glass parts with the same process.

Our customers ask us for 3D precision glass parts for two reasons: Either they need a 3D part made of a transparent corrosion-resistant material and are directly searching for our innovative 3D glass printing shop or they need a 3D part with micrometer precision and will come to us, because such precision is not available in metal 3D printing or conventional CNC machining.

You’re one of the 13 finalists in the Photonics contest cluster. Which challenges do you think young companies have to face in this sector? How do you handle these challenges?

Jens: One challenge for a new tech company is that the technology is new. Thus we have to supply everything by ourselves since one missing element could destroy the benefit for the customer and stop the show: The first prototype 3D part, the series production for testing, the mass production, the machine and its integration into the customers’ production environment and also the training of the personnel running those machines with a brand new process. We handle this challenge by focusing on our innovations and having an as small depth of added value as possible.

A challenge in the 3D printing field is that actually every market needs 3D glass parts. So where to start and how to do that in markets we laser technology people have no clue about? Our way is to go step-by-step together with the customer – since he knows his market and together with him we create new value with our technology.

Say a customer is very satisfied with their prototype: with your high-speed microscanner you are also able to offer them a bigger series or go into mass production? How exactly is that possible?

Jens:Our LightFab 3D Printer is fast enough to produce ~10,000 3D glass precision parts per year and after some optimization of the CAD design and the tool-path generation even more. But it is a waste of resources to always do the same thing with an extremely flexible digital printer.

Thus for mass-production of one 3D glass precision part we engineer a special machine and optimize the process to make this part much faster – but without modification of the special machine it can make only this one design. So we combine a tailored choice of our high speed scanning modules, e.g. one which writes very fast a straight line and another one which makes a fast circle and a third one with fast arbitrary movements of very short length. We synchronize the modules and produce special CAM software to optimize the throughput. This is not a 3D printer anymore since we disclaimed flexibility to gain productivity by a factor of 50-100 and enable mass-production of a million parts per year with a single special machine.

Thanks so much for the interview, Jens!