Missed out on the award show in CODE_n hall 16 last night? No problem – we have a wrap up ready for you revealing all of yesterday’s highlights including a few hints on what is yet to come. Needless to say, last nights award show was by far the most exciting event for all parties involved: the finalists were all nervous, but so were the hosts and partners. There wasn’t just one award to be given out, but four and so one highlight was followed by the next. 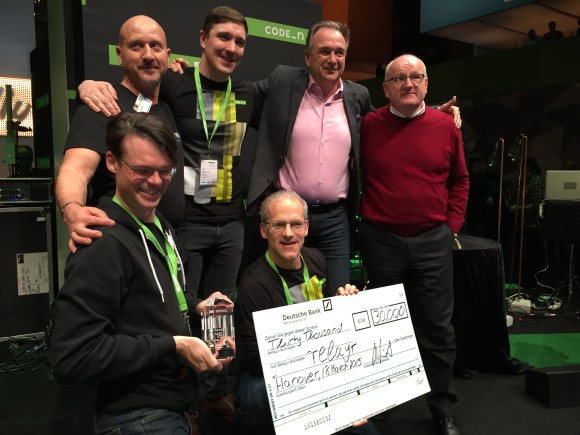 But let’s start from the beginning: Presenter of the show Annica Hansen welcomed a full hall and a hall full of anticipation. GFT CEO and CODE_n initiator Ulrich Dietz was asked on stage and thanked all partners and team members for making this year’s CODE_n CONTEST possible and once again spectacular. Oliver Frese, CEO of CeBIT said later on, that he remembered the moment when Ulrich Dietz presented his idea for CODE_n for the first time and Accenture CEO Frank Riemensperger encapsulated: you have to live your dream! In CODE_n hall 16, he went on, established players look out for the young players: exactly the spirit we all were looking for.

Some of these young players were in for a surprise: Salesforce for example, decided to give away their special “celebrate innovation” award by simply drawing the winner. Moritz Gräter, business development of CODE_n digged deep and revealed the lucky startup afterwards: aisoy robotics from Spain is now going to dreamforce 15 in California! Winner of the EY Igniting Innovation challenge was Greenbird IT from Norway. The challenge had been conducted through a social voting, in which everyone was invited to participate to vote for their favorite startup and Greenbird will now be going to Silicon Valley to meet leading innovators and corporate executives.

In between the live music by Hattler and a percussion session with Flo König, GFT awarded the winners of the digital banking contest in Poland: Andrzej Matlosz and his user friendly banking system got first, Jacek Janicki and his RDM Solution second and Arkadiusz Hajduk, Transparent Data third place. And then, finally, GFT CEO Ulrich Dietz came back on stage with an envelope that would reveal the winner of this year’s CODE_n award Into The Internet of Things. There was a drum roll, there was a pause and then there was a winner: relayr from Germany and their flagship product WunderBar! CEO Jackson Bond unwrapped their secret in one sentence: tech is as easy as chocolate! Together with the three lucky winners of this year’s contest, the partners, the CODE_n team and last year’s CODE_n award winner viewsy we celebrated until, let’s say, rather late that night.

But it’s not over yet, day four holds quite a few surprises, too and there are many other startups with wonderful booths, visions and solutions that are worth a visit. Come to hall 16 and see for yourself!

This article was reblogged under:  CODE_n Alumni | "We designed our vision of a social robot for educating the children of today" | CODE_n Blog