The way we work is changing: We’re moving away from fixed workplaces at central offices with defined working hours, and toward distributed work spaces with flexible working times – allowing us to work at anytime, from anywhere. For IT infrastructures, however, this evolution poses new challenges that are difficult to address with currently available technology. tocario’s solutions address these new circumstances: with flexible, cost-efficient, high-performance virtual desktops that can be accessed from anywhere in the world, at anytime, and on multiple devices. 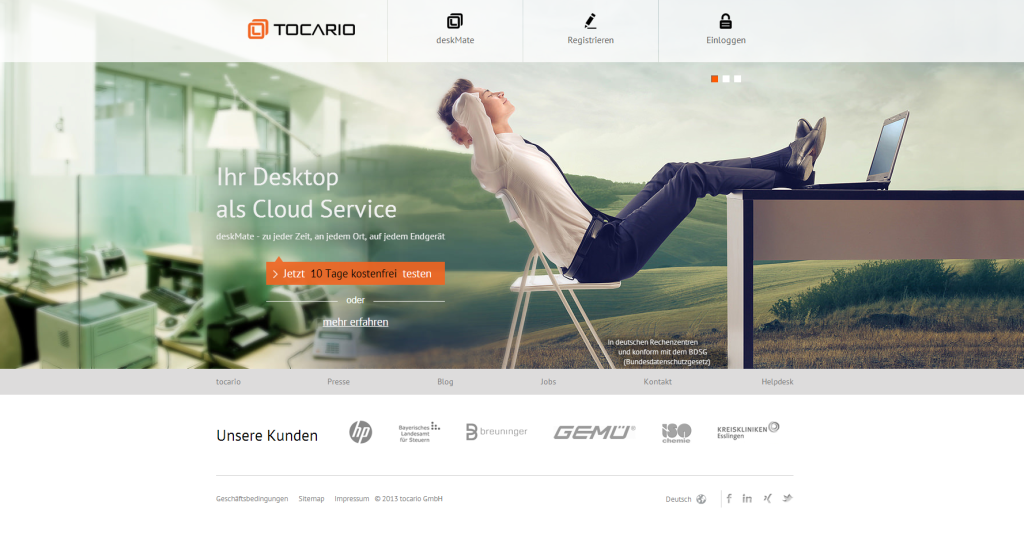 The way we work changes: Away from a fixed workplace at a centralized office with fixed working hours, towards working spaces with flexible working times and the possibility to work anytime and anywhere. For IT infrastructure however, this evolution poses new challenges that are difficult to address with currently available technology. Tocario’s solutions addresses these new circumstances: Flexible, cost-efficient and high-performing virtual desktops, which can be accessed from any where in the world at anytime and on multiple different devices.

To achieve this ambitious goal tocario developed a completely new technology in the field of desktop virtualization. Under the brand “deskMate” tocario offers the next generation of hosted virtual desktop (HVD) technology for companies and service providers. Delivered as Desktop-as-a-service (DaaS) even small and medium sized companies are able to benefit from hosted virtual desktops from the cloud. deskMate is a cloud service technology that is not only “Made-in-Germany” but also “Hosted in Germany” and therefore it meets the strict data protection and data security requirements of the European Union.

The founders come from an enterprise IT background and are former employees of Hewlett Packard. In 2012 the company secured it’s first round of VC funding. As a start-up focussing on cloud technologies, tocario is at the forefront of the current trends that are shown at CeBIT 2014. You can meet the team in the CODE_n hall 16, booth D30.

Industry experts talk about a run into the cloud. This is especially true for Desktop-as-a-Service offerings: according to Infiniti Research Limited the global market for hosted virtual desktops is expected to grow at a CAGR of 65.7 percent until 2016. The global players in the field of Virtual Desktop Infrastructure technologies like VMware and Citrix see the potential and are in a race for the market. They feel the need to upgrade their solutions for the cloud. As so often the innovations in this market come from small companies that lift technology to a new level. VMware, for example, just acquired Desktone to enable their VDI technology for the public cloud.

On the other hand you have the big cloud players, that announce to enter the market in 2014. The world’s leading provider in the area of cloud infrastructure, namely Amazon, just declared to start a DaaS solution by the first quarter of this year. So the former niche market grows up and DaaS evolves into one of the hot topics in the field of cloud computing in 2014.

Do you need a desktop with a real operating system in an app based, online world? Yes you do! In an B2B world employees still need a traditional operating system with all those productivity applications they are used to. As an example Google’s Chromebook is the evolution of the mobile laptop computing. But the service offering obviously does not address the needs of corporate end users. That is why VMware announced an on-premise product for enterprise customers, that want to provide chromebook users with a virtual Windows and a real office suite. With the new announcement VMware and Google are trying to modernize enterprise desktops for the mobile cloud era. Enterprises are promised secure access to their windows desktops with applications and data straight from Google chromebooks. Referring to Gartner the success of Chromebooks, as a cost-saving alternative to traditional laptops, is one of the big reasons why the demand for traditional PCs is going to decline by 15% compared to the year 2012. This example shows that the traditional Operating System with natively installed applications is here to stay. It also shows, that the public cloud desktop is not the comfort zone of the traditional VDI technology providers.

Where does tocario fit into the picture of global technology providers and big cloud service providers? Tocario offers a full featured Desktop-as-a-Service technology and service for managed service providers and cloud providers. In comparison to other technologies in the desktop virtualization market tocario deskMate offers state-of-the-art bandwidth usage, out-of-the-box multi-tenancy and a customizable self-service administration portal. Unique about the solution is the possibility to install every x86 operating system and application on the virtual desktop – no matter, if Windows, Linux, OS/2, DOS or any other legacy system. This enables end customers to bring any application into the cloud and brings flexibility and significant cost savings to all areas of desktop infrastructure.

As the technology is developed with mobile users and data security in mind, tocario deskMate especially addresses the challenges of bringing distributed teams together on one common, secure desktop infrastructure. Therefore tocario offers a solution to desktop challenges where today’s VDI technology will not fit

Evolution happens by continuous improvement. This mindset is written into tocario’s DNA. Our goal is to bring enterprise technology to all the other user groups that cannot afford big upfront investments or need a solution where current technology does not fit.