The ZKM – an experimentation workshop for artists, researchers, and its many visitors

One human trait that many would like to have, but few actually ever master, is to “think opportunity” at every turn. One person who can claim that he has done this all of his life is the founding director of the ZKM, Heinrich Klotz. It was in 1989 that he gave the ZKM the opportunity to think as big, active, and – perhaps most importantly – innovative as it is today. In the same year, he also set up the Karlsruhe University of Arts and Design (HfG) in a former munitions factory in Karlsruhe. 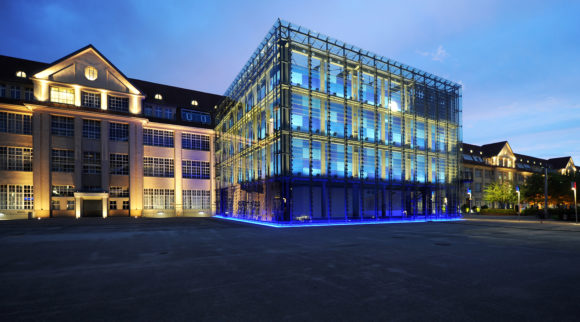 And why Karlsruhe? Because Karlsruhe is where technology is at home in Germany. It was here that Professor Werner Zorn, at that time head of the Computer Science Department at the University of Karlsruhe, and his assistant Michael Rotert received the first email through a German server in 1984 and it is here that the Karlsruhe Institute of Technology (KIT) is based, which is known across the world for its technical degree programs. This vibrant, young city of pioneers had no concept of such an institution in the 1980s, especially one of such magnitude, but its affinity for all things technological made it the ideal location for setting up an arts and media center. At the time, the ZKM also presented the people living in and around Karlsruhe with a major opportunity. They could now flourish – as art and science open up – on a completely new level. The ZKM also attracts a great deal of attention from the socio-political and philosophical communities and it has an important role to play in a technology region that’s active in research and development, frequently providing reminders of society’s ethical, moral, and democratic responsibilities.

A shining example on an international scale

The ZKM has been filling the public squares of Karlsruhe with interactive installations since it was founded. One recent example is the sophisticated video projection celebrating the Karlsruhe lights festival, or Schlosslichtspiele. The effect of such installations allows the ZKM – which is clearly more than “just” a museum – to shine through the city into the wider world beyond. Many works now tour the world’s museums and galleries, and many are created and exhibited by guest artists at the ZKM itself. One example that is particularly popular among younger audiences is the Gameplay exhibition, which is now also on display with minor adaptations in Mexico and the USA. The same applies to the highlights of the AppArtAwards for artistic applications, which have been bestowed for the last six years. These send out a signal from the ZKM, beyond the boundaries of Karlsruhe, to an audience on a global scale: keep applying digital technology to the world of art.

2016 was a special year for the ZKM. The international broadcaster Deutsche Welle named the ZKM a “world-famous experimentation workshop” ranked among the top 10 German museums – and a must-see location. The most widely read American newspaper, USA Today, described the ZKM as one of the 10 most important cultural institutions in the world.

About the author:
Lisa Merkel has been working as an intern at the Department Public Relations at the ZKM.

Lisa Merkel has been working as an intern at the Department Public Relations at the ZKM.