On their way to the Pioneers startup festival in Vienna, two busloads of young entrepreneurs stopped by at CODE_n on Sunday evening. While en route from Paris and Amsterdam, the passengers developed new startup concepts in the style of a “rolling hackathon” of entrepreneurship. The buses made a stop at CODE_n for their creatively-minded riders to showcase their projects and the associated business development ideas in 3-minute pitch presentations. The theme of the evening: “Growth Hacking.” 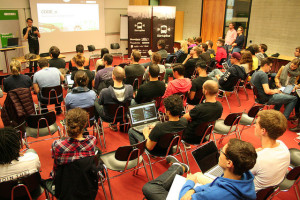 Sunday, 6:00 p.m. – a bus pulls up in front of GFT Technologies in Stuttgart-Hohenheim. 20 young founders armed with laptops and plenty of new ideas disembark from the StartUpBus GERMANY. The “buspreneurs” from the StartUpBus FRANCE have already turned up and made themselves at home in the GFT building. Having arrived unexpectedly early that afternoon, they improvised by turning the GFT location into a co-working space. The atmosphere is relaxed, focused, business-like: With the founders gathered around laptops in groups, concepts are discussed, developed and poured into presentations. There’s only time for a quick bite and a short introduction to CODE_n before the “pitch battle” gets underway. Each project team has only 3 minutes to present their business concept and discuss ideas for business development all the way to mass market rollout.

The following innovations were presented at CODE_n:

Winner of the day: Spicer
The jury – made up of CODE_n PR rep Felix Jansen, Kathleen Fritzsche from Startup Stuttgart and some of the StartUpBus organizers Romain Dausset, Oliver Gassner, Ruben Evens and Marko Müller – decided in favor of Spicer – an idea they saw as well thought-out and offering exciting possibilities.

Saying goodbye
Shortly after the pitches – which ran until after nine in the evening – the buses drove off. The buspreneurs closed their laptops, packed up their cables and got back into their rolling offices. It was on to Munich, after which the next stop would be the Pioneers Festival in Vienna. We’d like to take this opportunity to thank them all once again for their visit to Stuttgart. It was really interesting and we met a lot of highly engaged new people with original ideas.

We published some fotos of this event at Flickr …