Sascha Lobo chats with Oliver Gassner about the digital public, the reason he wears a mohawk, about OkCupid and co. – and reveals his favorite successor to the word “innovation”. 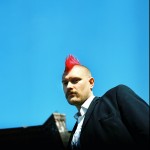 Oliver Gassner: Hi Sascha, rumor has it that there are people who either don’t know you, or don’t have a polarized opinion of you. Would you please introduce yourself to our readers?

Sascha Lobo: My name is Sascha Lobo. I’m an author and strategy consultant. And I find myself in the fortunate and luxurious position of being able to think about the Internet full time, and to publicize my conclusions on a variety of platforms for verification.

OG: What’s the most enjoyable or useful (new) web or mobile thing that you’re using at the moment?

SL: There are several: I’d be lost without Dropbox and Gmail. Shazam brightens my chance encounters with music, and I use Twitter, Facebook, and Google+ for communication, conversation and activation. Siri is fun, but not good enough yet – the German version at any rate. And my blog is still the foundation of everything.

OG: Innovation is overrated, isn’t it?

SL: No, innovation is dramatically underrated. The word itself is smeared and shopworn from excessive, incorrect use, though. Maybe we should invent a new word for innovation that sparkles with the same beauty and utility as the idea it represents.

OG: Is the statement “Germany is hostile to innovation” meaningful, or does it simply have a convincing ring to it?

SL: I can’t say for certain whether it’s true. However, I suspect that the statement is wrong. German structures certainly are quite slow, precise, and almost ponderous. That’s usually a very good thing, but we shouldn’t ignore the fact that it can become a liability in an increasingly accelerated network age. It already is when you consider that hardly any German companies have a truly sure footing on today’s Internet.

OG: Are there any laudable exceptions?

SL: Of course there are exceptions – I would imagine there are in virtually every major enterprise. But on the whole, they still play too small a role, for example in developing new business fields and markets.

OG: Is it possible to innovate without making real money in the process? In other words, can there be progress without cash flow and evil, evil profit?

SL: Profit is not evil. Businesses are not evil. Progress without businesses in the market-economy sense would be sad indeed, especially since the digital public is often hosted on private servers. I believe the digital public needs to be renegotiated, precisely because it is structurally different from the conventional public.

OG: Where do you see the platform for such a renegotiation? Or will the Pirate Party ensure that it is created throughout society, in all parties? The (old) “media” don’t seem very suitable, do they?

SL: The Internet as a whole is such a platform, as are the professional media between print and websites that digital citizens often underestimate. We certainly lack a single instance that would permit a focused political discourse. I can’t say exactly what it would look like – all I know is that we need one. And we may be lacking it for a long time to come.

OG: You met your future bride on Twitter, as you recently revealed in one of your SpOn commentaries. So, can Facebook (which I always call “hormone management software”) and ElitePartner call it a day now?

SL: Facebook, no – ElitePartner, maybe. I expect there will always be great demand for dating sites on the net – in future they are more likely to be apps on existing platforms, though. Or they’ll go in a direction that leverages the power of the net in their own way, as OKcupid.com did, with a highly social, but granular, interest-based approach.

OG: And – can we look forward to tweets from the courthouse and delivery room?

SL: No. I publish my private life only in very small doses. The announcement of my upcoming wedding on Facebook and Spiegel.de was rather an exception.

OG: So the “Sascha Lobo” we see on the Internet is a carefully designed fictional character?

SL: Not quite. There is a media-based side of Sascha Lobo and a more private one (and others, including simultaneous combinations). There may be more overlap than I sometimes care for, but they do indeed differ in the end. Nevertheless, they’re all me. And that’s why I reject the “fictional character” moniker. It’s misleading and too often used to negate responsibility for a person’s actions in the media.

But I will admit that I work with strategies related to myself personally (above all communication strategies).

OG: You probably get this question all the time, but the picture of you on the dust jacket of your book Wir nennen es Arbeit: Die digitale Boheme shows you without your trademark mohawk. When presenting the book at the Frankfurt Book Fair, you were wearing one. How did that come about?

SL: I’ve been wearing a mohawk since October 2, 2006, one and a half days before the Book Fair. The haircut, which I still really like, is a part of my communication and media strategy. It’s so obvious that I don’t think there’s any point in denying it. At the same time, the mohawk is a bundle of social experiments that I might just write about – someday. Actually, I combined this haircut with a suit already in 2002. My reasoning behind it was this: Authors at the Book Fair tout their books on the Blaues Sofa of the ZDF, the German public TV network. Holm Friebe and I were invited to present Wir nennen es Arbeit. A hundred hours of video material are then edited down to a best-of compilation for broadcasting. The authors who make the cut are either very famous, very good-looking, or have ridiculous haircuts. It may be nothing more than conceited nonsense, but it worked – and that’s the case more frequently than we’d like to think.

OG: Europe is a copycat, the United States are innovative. Right?

SL: Europe does strike me as less innovative in the small and often overrated world of Internet startups. But I’m no expert in the field, so I’ll keep my opinions beyond that superficial assessment to myself.

OG: What do you personally need to be creative?

SL: If only I knew. I dance around my creativity the way a shaman dances around a campfire to influence the weather. I achieve a basic measure of creativity with the most obvious tools that you can read about anywhere: serenity, a lack of anxiety, relaxation, study of the subject, talking to friends and holders of qualified opinions, white wine, and time pressure. But the peaks – creative achievements that I personally consider satisfactory – come about in a completely erratic manner for me.

OG: Would you care to predict what the net’s next big thing will be?

SL: The cloud of course, real-time Internet and “big data” will be the next big things in my opinion. But that’s not necessarily an unusual view – it’s totally middle of the road.

OG: Can you even still remember what life was like without a phone and the Internet in our pockets? Has life become better? Simpler? Or more complicated?

SL: Yes, I can remember, but it was in my childhood and early adolescence, and I had to look after little more than myself back then. So I’m personally very grateful for all of this digital networked stuff, otherwise I would have had to pack it in, in just about any field. I probably would have ended up bitter from persistent failure due to forgetfulness. But that’s a personal perspective. We shouldn’t forget that people also managed to accomplish quite a bit before we digital types came along – to understate things massively.

OG: And finally, let’s – as you suggested earlier – invent a new word for innovation. What would it have to sound like?

SL: Being my special field, I’ve given that some thought. My new book Wortschatz, which is coming out on November 1, 2011, is exclusively about new words. But in this case, the word already exists. It’s called “progress”.