Hall 16 of this year’s CeBIT will be dedicated completely to CODE_n and the topic “Into the Internet of Things”. To visualize this theme, an interactive installation ROBOCHOP, created by renowned Munich designers Kram / Weisshaar, will be part of the exhibition. ROBOCHOP is composed of 4 industrial robots which slice objects out of cubes. These objects are designed via web app by internet users worldwide. The cubes will be produced on location, packed and sent to the users at no cost. 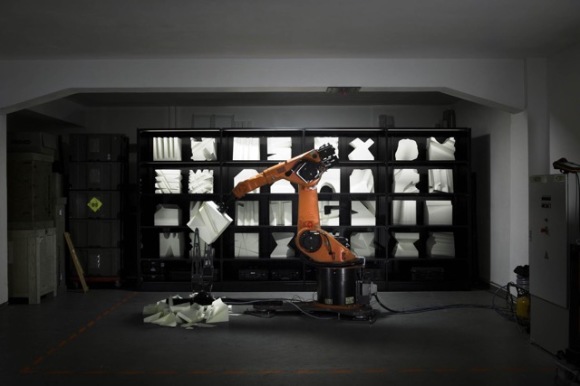 What is ROBOCHOP? ROBOCHOP is the central, interactive installation of CODE_n15 in hall 16 of CeBIT.

ROBOCHOP is an interactive robotic installation by Clemens Weisshaar and Reed Kram commissioned by GFT on the occasion of CODE_n supported by CeBIT, EY, Salesforce, Accenture, EnBW, TRUMPF and KUKA

ROBOCHOP uses the communication process of the Internet of Things and especially one of the central ideas of the “industry 4.0″ concept: consumers can develop their products themselves and communicate directly with the producing machines. Utilizing a web app, users manipulate the raw material – a cube measuring 40 x 40 x 40 cm – to create an individual object. The finished product is then packed and shipped to the user. ROBOCHOP is expected to produce up to 2,000 objects from these cubes during CeBIT.

The ROBOCHOP Web app: users design their individual cubes on their digital devices (smartphones, tablets, PC). Different methods of slicing can be used to create an highly individualized object. The data will be sent to the robots, which use a hot-wire cutting tool to produce the creations of the global users in hall 16 at CeBIT.
Internet users will already be able to access the ROBOCHOP web app from March 4 onward at www.robochop.com and send their designs to the robot production line.

The cube: The blanks are made of high-density expanded polystyrene (18kg/m3). Moulding 400 x 400 x 400 mm with fit feature to lock in with needle gripper tool. Up to 2,000 cubes will be handled during CeBIT.

The machines: 4 KUKA Quantec KR150 r2700 extra industrial robots will be employed. The robotic arm will move the blank cube along a hot wire cutting tool with integrated coaxial cooling and sensor triggered in process control of the cutting speed to realize the creation of the user.

See this video with first beta tests with a industrial robot by Kuka.

The logistics: the cubes will finally be produced by the robots in hall 16 of CeBIT and then packed for shipping. From Hanover, Germany, the objects will be transported to users around the world at no cost.

The ROBOCHOP installation has been developed by renowned designers Reed Kram and Clemens Weisshaar, based in Munich and Stockholm. They already worked with industrial robots for their London project OUTRACE in 2010. Kram / Weisshaar designed the CODE_n15 hall 16.