Partner interview EY: "We need to redefine our relationship with cars"

The Swiss inventor Frank M. Rinderknecht has been keeping the car industry on tenterhooks for years with his forward-thinking concept cars. Peter Fuss, EY Automotive Partner and chair of the CODE_n-Future of Mobility Panel, spoke to the Swiss visionary ahead of the exhibition about the future of mobility, the danger of a fatal crash for car manufacturers if they fail to recognize the signs of the times before it’s too late, autonomous driving and the need to redefine our relationship with technology. 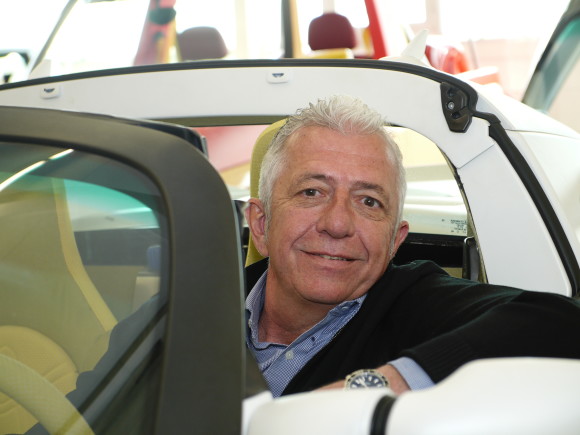 Peter Fuss: Many of your car concepts have the future in mind. How do you see the future of mobility?

Frank M. Rinderknecht: First of all I think that despite the rise of the Internet and social media, the frequency with which we move from one place to the next will only increase. The virtual world cannot replace our real friends; we want to see them regardless of location. And this places exceptional demands on future mobility. Mobility must become more intelligent. Accordingly, the cars of tomorrow must reduce or eliminate fuel consumption, and they must be recyclable. They don’t belong on the scrap heap! Furthermore, I find it astounding that so many car manufacturers continue to pull wool over their eyes and willingly ignore that fossil fuels will eventually run out and inevitably be followed by skyrocketing gasoline prices. If they’re not prepared when that time comes, a fatal crash could be on the cards. Tomorrow’s winners will be those who have already acknowledged these facts and are working on alternatives for the future.

Fuss: How do you see the role of the car in your vision for the future?

Rinderknecht: As I see it, the car will continue to exist in the future quite simply because people feel that they have a fundamental right to individual mobility. But the car itself and the way in which it’s used must, and will, change. It’s going to become smaller, more efficient, adaptive and possibly be shared with others. One of the many possibilities is car sharing, another is public transport. We associate sitting in traffic with tedium; at times like these we feel we don’t need our own cars. Then at the weekend we may find our enthusiasm for driving again, hop into our own car and drive into the countryside. But to do this we don’t have to be behind the wheel of a six liter sports car anymore; we need to change our mindset. It was as early as 2002 at the Geneva Auto Show that we unveiled our Rinspeed Presto, a car which can transform from a two-seater into a four-seater in a matter of seconds, to give an idea of what a car of the future might look like.

Fuss: An assertion you’ve made in the past is that a car isn’t simply a means of transportation, it’s also “a friend of the people.” What do you mean by this?

Rinderknecht: Technology is growing ever more intelligent and in many cases is now able to replace human beings. Autonomous driving is an example of this: the act of seeing is made obsolete by sensors and the act of steering is made obsolete by robots. This will certainly lead to a new relationship between humans and technology: We rely completely on the technology for our safety, just as we would rely on a living and breathing driver. And this demands that we redefine our relationship with technology. We must build up trust in it. This is exactly what I mean when I talk about technology and the idea of a car as “a friend of the people.”

Fuss: So where do you stand on autonomous driving?

Rinderknecht: Allow me to come back to the contrast between tedium and exhilaration on this point: If driving is associated with tedium due to the hours spent sitting in traffic, then surely autonomous driving, which allows us to save time and improve our quality of life, is a terrific advancement. That’s why I’m an advocate of autonomous driving, and it’s exactly for this reason that our new concept car, the “Budii,” has an autopilot function. However, autonomous driving raises many ethical and “analogue” questions alongside the technical and “digital” ones. Which brings us once again to my idea of a car as “a friend of the people”: We need to redefine our relationship with cars. We need to trust them as if they were human, and so it follows that we must also expect and allow for the occasional mistake. However, the number of mistakes made by the autopilot function will certainly be a lot lower. The rate of accidents will decrease once autonomous driving is introduced.

Fuss: And what is your position regarding the digitalization of cars? Do your primary considerations concern the benefit of retrieved information, or the collection and storage of data?

Rinderknecht: I think there are two levels to consider regarding connectivity. Digitalization of cars makes sense if it allows people to find out about safety hazards such as traffic, black ice or accidents. However, it makes absolutely no sense to me if it means that people start playing around on their smartphones even more than before and thus themselves become a safety hazard – unless they hand over control of the steering wheel. This brings us back to autonomous driving and its advantages: The autopilot function allows me to write text messages or emails while on the road. I personally don’t find data collection as a result of connectivity particularly concerning – I have nothing to hide. Besides, I reckon that in five or ten years’ time we’ll be a lot more relaxed about this issue than we are today. It’s interesting to see how so many people using social media willingly disclose so much about their lives without a care, yet when it comes to data security they change their tune completely and become rigidly defensive.

Fuss: How do you envisage your next project? Will it have four wheels, will it be able to fly or can we expect something entirely different?

Rinderknecht: I think it will be something entirely different. My work has always been driven by a thirst to be innovative and to explore unchartered territory. I’ve always had a passion for thinking outside of the box and generating an impetus for change. I’ve always sought out a challenge. And now I feel like it’s time to create something radically new again. The exact form which it will take remains to be seen. But it’ll certainly reach new heights – regardless of whether it has wings or not.

Peter Fuss is Senior Advisory Partner for Automotive at EY. A passionate driver himself, he is fascinated by self-driving cars which he believes have the potential to improve the organization of future mobility and to minimize traffic jams, accidents and loss of time. “I’m very excited that we’re able to collaborate with Frank M. Rinderknecht and have the self-driving Rinspeed design study Budii on display in CODE_n hall 16,” says the Automotive Partner. “We want to do more than just demonstrate the future horizons of mobility; we have the potential to inspire innovative thinking not just in the auto industry, but also in IT and internet companies.”

Text and photos approved for publication with Frank Rinderknecht of Rinspeed and Peter Fuss of Ernst & Young Germany, 18. Feb 2015