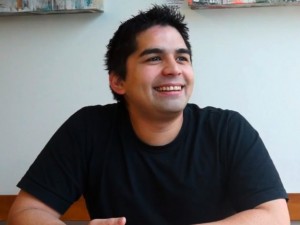 Oliver Adria worked as a sustainability consultant focusing on corporate responsibility and sustainable retail products before launching Nachhaltige Jobs, a platform specifically for sustainable jobs, in 2013. He’s also an active blogger, managing Faktor N, Rethink Presentations and Impact Startups. Adria grew up in Indonesia but moved to Germany after finishing school; he is currently based in Cologne.

Janina Benz: How did you come up with the idea of founding an online platform dedicated to jobs in the field of sustainability?
Oliver Adria: I’ve been working in the area of sustainability for about 7 years now, working on corporate responsibility and creating more sustainable consumer products. Recently, more and more friends have been asking whether I know of any jobs in the sustainability area, and on my sustainable lifestyles blog, I’ve noticed that most of the pageviews were on the jobs pages. So I combined these findings and my passions (programming, sustainability and web/social media) to create a site for sustainable jobs only. I gained some good traction in the first year, so a couple of weeks ago I took the leap, and I’m doing this practically full-time now.

JB: Do you think your platform could have worked 10 years ago? What’s changed?
OA: I think it would’ve taken quite a bit more work to get the same results. Today, more people are informed about sustainability and environmental issues in general. There’s a bigger market, there are more companies focusing on sustainability as well as sustainability departments within large companies. Also, there is so much more web technology available. A platform would have been possible 10 years ago, but it would have been smaller and looked quite different.

JB: Congratulations on winning the Science Slam “Brain” prize! Could you tell us a little more about it?
OA: Science Slam is a presentation format where scientists and researchers explain their research in a way that it’s fun and understandable to the interested public. Afterwards, the presentations get voted on… by the audience! Science Slams are hosted throughout Germany, and there are several nationwide contests. In 2012, the topic was sustainability (officially “Project Earth – Our Future”). After a regional round, I went on to win the “Science Slam in the Science Year 2012” prize in Berlin. Thrilling experience!

JB: Who typically participates in these slams?
OA: They’re mostly students who are near the end of their undergraduate studies or are doing their Master’s Degrees. But we also have people doing their PhDs, and occasionally some professors. It’s a mixed bunch, though it’s mostly males. We’re trying to get more female scientists and researchers to present their work at a Science Slam, but they’re still very underrepresented at the moment.

JB: As you mentioned on Faktor N, you recently slammed for a group of 6th graders. How did that go? Were the student well-informed about sustainability?
OA: That was part of a EU project to have “Environmental Days” in different German schools. I practically didn’t change anything for the younger audience—and yes, most of the students understood it! (And in case you were wondering, I spoke about Advanced Adiabatic Compressed Air Energy Storage, which makes it possible to safely store renewable energy by temporarily compressing big amounts of air into empty underground caves.) Some of them asked really good questions and were very curious about the technology I presented. I think that’s great to see: curiosity, asking questions, wanting to dig deeper. Unfortunately, when you grow up, many lose that sense of curiosity.

JB: Do you have any recommendations for our CODE_n finalists about how to prepare for their big showcase at CeBIT?
OA: Make it easy to follow-up on the project and team, and make it easy to keep people interested—refer to your blog or to your newsletter, and if you don’t have one, start. Get people’s business cards and send a nice follow-up email a week later. CeBIT might be the place for first contact, but make sure it’s not the last contact.

JB: What do you think is the best way to get media attention during CeBIT?
OA: Write some articles to the run-up to CeBIT and announce on your website (and promotional material) that you will be at CeBIT. Encourage people who visit your website to also visit you at CeBIT. Make many connections—even if journalists don’t write about you now, they’re good to know for the next time you launch a feature or product.