“Keep calm and just keep going!" Inspiring insights on how to deal with failure by a 26 years old entrepreneur and founder of a company which already launched three products.

Most people in their mid-twenties have neither thought about founding their own company nor have concrete ideas about the products they’d like to produce. But there are exceptions like the 26 years old Andreas Kwiatkowski. He is a passionate entrepreneur who founded his own company and has already launched three products. Impressed? His resume reveals even more. Before starting his own business, he was head of product management at simfy and even worked for a couple of years at IBM. 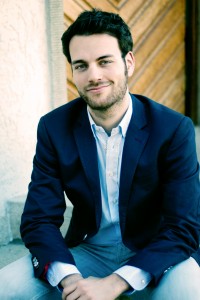 Janina Benz: Hello Andreas. I’m sure our readers would really like to know how you achieved so much in the time that most people (in Germany) are still finishing their studies?

Andreas Kwiatkowski: Indeed, some of my friends are still at university or pursuing an academic career while finishing their PhD. However, I was lucky enough to find a shortcut and got my degree through a cooperative education program at the Berufsakademie Stuttgart. This involved three months of solid study and taking up to ten exams in a row, followed by three to four months at IBM in Germany, England or the USA, then repeating this, for three years, with (officially) 30 days off each year instead of semester breaks. Skipping civil service before this also saved me a year.

In my time off, I was largely pursuing my interest in design and photography to the point where I was actually making money out of it. And I kept on reading as much about entrepreneurship and web startups as I could get my hands on.

Taking the fast path didn’t help that much with the corporate career: After finishing my studies and joining IBM full-time to work on larger IT outsourcing sales projects, I realized that if you don’t have enough “life experience” or, in some cases (just as importantly), a good bit of grey hair, you sometimes need to work twice as hard to gain respect. Luckily, age doesn’t matter in most of the startup world, actions do.

JB: Is there a history of entrepreneurship in your family or where does this spirit come from?

AK: I’m the first to start my own business. A distant relative of my mother was a painter, but I doubt that counts as a typical entrepreneur for most people. Who knows what makes us build up our own “reality distortion field” – that’s what people around Steve Jobs called his visionary, almost stubborn way of looking at things in his very own way.

JB: Is it possible to learn how to become an entrepreneur or is there something like a special DNA you have to be born with?

AK: There might be certain ways to get you hooked up, like entrepreneurship master programs, which seem to be popping up left, right and center these days. But even better, you just need the courage to work for a startup now, instead of joining a big company or doing it later in your career (it’s often less risky than you think).

However, at some point you might realize that people destined to found a company can be different (even if they don’t necessarily seem that way in the first place). They’re hungry and passionate. They never hesitate to go the extra mile. Not primarily for monetary success or fame, but often just to build something on their own and lead people (in Eric Ries’s words) under conditions of extreme uncertainty. Some are probably born that way, others discover or develop the drive over time.

JB: Turning to the here and now, you’ve just launched a web and iOS App called EISENHOWER, which helps you organize tasks efficiently. There’s a lot of competition out there. What’s so special about your idea?

AK: My co-founder, Tim Brückmann, and I recently launched EISENHOWER as a special task management solution entirely based on the proven Eisenhower matrix time management principle. It was built with simplicity in mind, so we provide you with a suite of software applications and tools to focus on and work on only the most important tasks. So not only does it help you prioritize and plan easily, it also minimizes stress and increases productivity by supporting you with actual task completion. It’s not just about compiling never-ending lists until your conscience catches up with you and you feel like you have to start again with another tool. We’re also offering B2B services like time management training and high-volume EISENHOWER notepad orders. But it’s still early days, so our primary focus is on shaping a well-crafted B2C offering.

JB: The app has been available through the iTunes App Store since the beginning of the month. What’s your first impression?

AK: It’s been quite a ride recently. To release something after ten months of working part-time on it (which mostly involved trying to find time to get together and get on with it), it just feels unbelievably awesome. Working with Mike Butcher from TechCrunch on an exclusive, which was published in parallel to the release of our app on App Store, has also enabled us to leverage other media outlets. This gave us a kick-start within the first two weeks on the market – blogs like Lifehacker and even The New York Times print edition picked up on us. This resulted in thousands of new users, tons of great feedback and a fun Eisenhower matrix revival, not just on Twitter but also in the international blogosphere.

JB: Talking about startups in Germany, the first city that usually comes to mind is Berlin. But Simfy is based in Cologne. What are the pros and cons of not starting a startup where everyone else does it?

AK: Most web and mobile startups can work anywhere they like, or as in our case, from home. Of course places like Berlin, London or even the Valley have huge networks and this helps startups exchange experiences and makes it easier to raise funding. But thinking about Germany, I’d say Cologne is right behind Berlin, and it’s probably on a par with Munich. There’s a growing community of entrepreneurs, business angels and venture capitalists, and, as a result, events – basically everything, even a co-working infrastructure. The betahaus franchise also set up a really cool place in Cologne last year which gives business founders easy access to a desk without the kind of long-term rental agreements that would cost you your head if things don’t go so well from time to time (although this is quite normal – in fact contrary to common belief in Germany, it’s nothing to be ashamed of). To sum it up, every place has its pros and cons, but I tend to think that being outside hot spots like Berlin sometimes helps because there are fewer distractions, especially during the early days of a startup.

JB: Every entrepreneur has to cope with failure once in a while. How about you? And what’s your recipe for dealing with failure?

AK: We’ve all heard people telling you to “Keep calm and just keep going,” and I think the same applies to business failures. Take in what you’ve learned and don’t make the same mistake twice. Although we do tend to overreact and panic when things go wrong, I’d say: think first, then act. Having a co-founder you can share your feelings with and mull through the options with is worth a lot. Single founders might be tempted to focus on fixing the current problem with a mediocre solution and neglect all the must-do’s you need to carry out, just to keep the whole business up and running in the long term.