Every year, startup competitions like CODE_n help foster and support a whole host of emerging enterprises. But with quite a few contests now running in Germany, it’s difficult sometimes to see the wood for the trees. So at Für-Gründer.de, we decided to create a bit of clarity ourselves. In total, we’ve discovered that there are currently 124 contests on the scene, and in 2014, the prizes and funding up for grabs totaled more than €3 million.

Tallying up the value of prizes (cash and non-cash prizes), the sum actually comes to €3.2 million. Considering the fact that 834 awards were bestowed, all eyes most probably (and quite rightly) will have turned first toward national and international competitions such as CODE_n. That’s not to say the individual states of Germany weren’t offering their own attractive prizes, as we know from an earlier Für-Gründer.de publication (Gründerwettbewerbe und Top Start-ups 2014/2015 – only available in German). 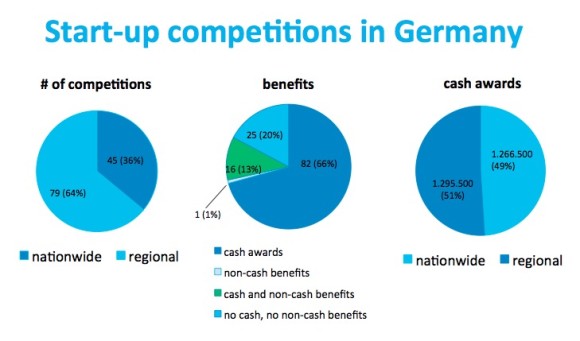 Of the 124 contests staged, 98 offered the winners monetary prizes. The total value of all these awards in 2014 was €2.56 million. Other awards that went to the winners were of a non-cash nature, or in the form of consulting services, and these were worth a further €600,000.

Despite the spoils of success, however, startups and entrepreneurs should not just be thinking about the money or non-cash prizes to be had. Especially in areas such as information and communication technology (ICT), money by itself is like a drop in the ocean. There’s a lot more for startups to gain from contests with a focus on IT, like CODE_n. One key aspect is how professional and considered the feedback is on a new product, or the quality of new contacts forged with experienced technology firms. Such companies are eager to exchange their expertise for fresh impetus from IT startups. And that’s a pretty good deal in this kind of industry.

Of course with ICT contests it’s certainly not about penny-pinching. Out of the total amount of €2.56 million handed out in 2014, the ICT contests alone accounted for €600,000. The individual prize offered to the winners of CODE_n is as much as €30,000, placing the contest in the top three in terms of prize money per startup.

Another important aspect is that participants in ICT competitions regularly benefit from personal mentoring and gain access to some pretty exclusive networks. They also soon notice the resonance in the press, which is practically a hot-wired likelihood for the winners and finalists of a well-known startup contest. CODE_n always gets good coverage from well-known German publications like the magazine t3n, the Frankfurter Allgemeine newspaper, heise online, the business and lifestyle magazine Business Punk, PC Welt, FOCUS Online, the public broadcaster NDR, PAGE, as well as the newspaper Süddeutsche Zeitung (and of course Für-Gründer.de).

In a nutshell then: taking part in startup contests and business simulation competitions is definitely worth it. Aside from the large number of contests open to entrepreneurs in any kind of industry, startups with ICT business models also have a bunch of competitions to choose from that are a closer match with their own specialty. But it’s worth remembering that the prize money should not be the only judgment criteria for deciding whether to participate. Instead, it’s more about maximizing the leverage gained by being in the limelight and attracting the attention of the media, investors and potential business partners.

For more facts and figures relating to startup contests, plus some handy tips on how to make such events a success for you, Für-Gründer.de has written a special publication in German called Gründerwettbewerbe und Top Start-ups 2014/2015.

The author of this article is Ana Julia Alexandru – managing editor of the portal Für-Gründer.de

Ana Julia Alexandru is the managing editor of the portal www.Für-Gründer.de