Future mobility: the transport solutions of the future are already here with us today. A progress report.

People working on the transport solutions of the future need to base their ideas on the premise that cars – in the way they’re driven by the masses today – will be just one of a number of transport building blocks, not the crux of transport systems. They will be replaced by a network of completely different modes of transport, ways for humans to satisfy a basic need and travel as quickly and conveniently as possible from A to B. At least that’s the theory. And what will it look like in practice? Not bad actually. As we discover in this personal review.

Of luxury – and the luxury of not owning a car
I live such a life of luxury: since the beginning of the millennium, I’ve no longer owned a car. Hang on, isn’t owning a car what a life of affluence is all about? Free access to everything – a given right? Well until now, yes. But times change. The role of cars as status symbols is gradually becoming passé. Younger people in particular gravitate towards different status symbols like smartphones. But coming back to my travel habits, of course I do drive a car, in fact I love driving. But using a car to satisfy my travel needs is just one part of the jigsaw puzzle. Admittedly, it really helps living in a place like Stuttgart, a city regarded by many as pioneering when it comes to transport solutions. This role goes back to the early 20th century. It was here that the first Mercedes was engineered, ringing in the era of the automobile. It is also here that not only Daimler and Porsche now have their HQs, but also companies that furnish and fuel the global automotive industry like Bosch, Mahle, Eberspächer and the CODE_n partner Trumpf.

Stuttgart is the heart and lungs of the German carmaking industry, which makes it all the more interesting to find people here already shaping an alternative future for travel solutions. It sometimes feels like a huge laboratory. So as a contemporary of the car-less generation, what does my day travelling around this area look like? To answer that question, we need to assess the things I have on my to-do lists. 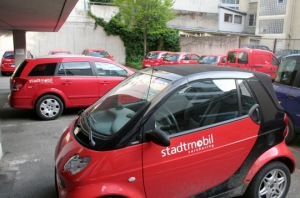 If my destination is fairly near – ie, within 20km – the first question is whether the pretty efficient local transport network can get me there. In my case I have the underground, suburban trains and trams to choose from. I can work out the best way to get there by consulting an app offered by the local transport company. While doing this, I can also buy a ticket on my smartphone. 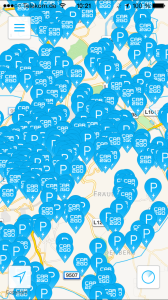 The Stuttgart-based car giant Daimler has also been offering a service called Car2Go for around 2 years now. They’re running a pilot project and there are currently around 500 vehicles on offer. What’s special about the Daimler scheme is that all cars are electric – a Smart Electric drive. The company has been working with the CODE_n partner EnBW to build up a network of charging stations. Currently there are 450 locations and the system is working pretty smoothly.

One of the nice things about Car2Go is that it can be used in any city where the scheme is operating, something I made extensive use of recently on trips to Berlin and Hamburg – for example, for travelling to and from the airport. Which brings us on to long-distance travel…

Going far? The world’s your oyster
So, how should I get about today? On the train? By aeroplane? In a 3-series BMW? Well it all depends…

But what about the costs?
People often ask me that. So let’s go through the numbers for my Christmas travel. Overall, I’ll be out and about for 4 days and it’ll be a round journey of 1000 kilometres (about 620 miles). Total cost: around 400 euros. Hmm, enough to make you think twice, especially if you’re a car owner. But if you ask me, most car owners don’t realise how much they fork out for their metal wagons every year. Fancy going through the maths for a moment? Let’s assume you own a car in the upper mid-range (long-distance journeys!) and you’re doing around 15,000km per year. You paid €25,000 for the car. Annual petrol €1200. Insurance and road tax €500. Wear and tear (tyres, brakes etc): €500.

Add to that the depreciation over 10 years and you’re easily talking €4000 per year, just to own a car. And the way I see it, the car is costing you something even if you keep it in the garage. Contrast this with taxis, a trip on the underground into the city (with crammed, expensive car parks), etc. But I only incur expenses when I actually drive a car. And: if I need something bigger to pick up something from IKEA, I just go and get a van. If I’m in a city, I use a small car. So overall, I don’t actually pay more, I pay less. This is basically because I do a lot fewer car journeys than I would if I owned a car.

Until now: cars have been a door to freedom.
What I’ve witnessed in Stuttgart: not having a car has been ultimate freedom.

Future Mobility – it’s on the way
I remember the days when they had these really far-fetched reports on TV on how, in the future, road travel would be completely different. It was like watching a sci-fi channel prophesying that one day, we’d have complete traffic overviews in real time. The assumption: all vehicles would be equipped with transmitters updating their exact position every second. Another vision involved cameras positioned every metre along the roadside to transmit the latest information. I thought, no way, what a palaver, that’ll never happen. But actually, this future is now the current reality. Almost unnoticed, Google was out there years ago integrating live traffic data into its map services. The only trick is that there aren’t transmitters in cars, they’re inside the Android smartphones of the car drivers. The system logs their positions, condenses it, and we have traffic data. So the future has been with us for some time, without singing and dancing and girls with pompoms. It just happened.

And so it goes on. 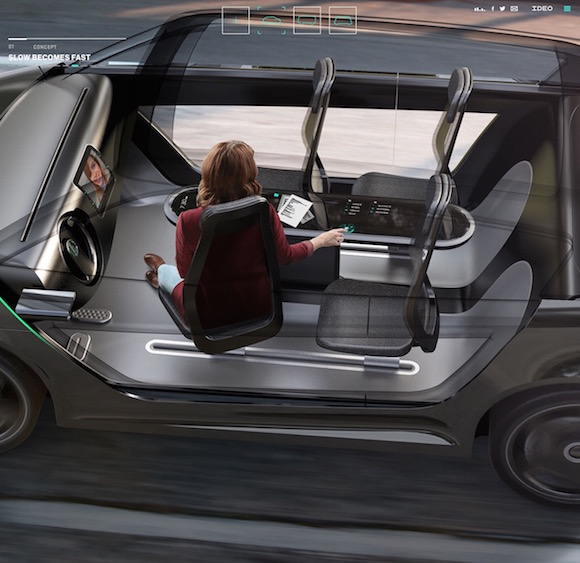 The travel and transport concepts of the future are already starting today. We still have a long way to go, so there’s also still plenty of room for new startups and their innovative ideas. This is one of the reasons CODE_n will be looking further into this area – through the CODE_n CONTEST at the CeBIT trade fair and in the new CODE_n SPACES in Stuttgart. We’re following developments closely and also going on the journey.

PS: I’ve got a strange hobby: I collect photos of charging stations for electric cars.. 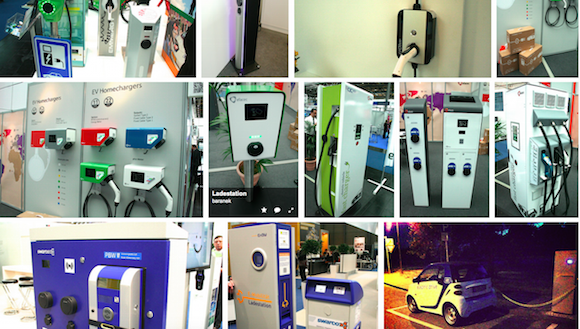