The contributions made by women to driving forward with innovation is incredibly valuable for the startup scene. But female founders, especially in the tech field, are still few and far between in today’s world of entrepreneurial activity. Why? What is important to female digital pioneers? And what are their experiences when it comes to their careers and doing their own thing? We’ve taken a closer look and asked three visionary women in the CODE_n community about their viewpoint on the topic – one pursuing innovation in retail analytics, another doing pioneering things in smart energy, plus an entrepreneur who built up a startup network from scratch. And guess what: They were more than happy to share their inspiring stories with you! Learn from female entrepreneurs, innovators and leaders about their amazing insights into women in the world of business and startups. 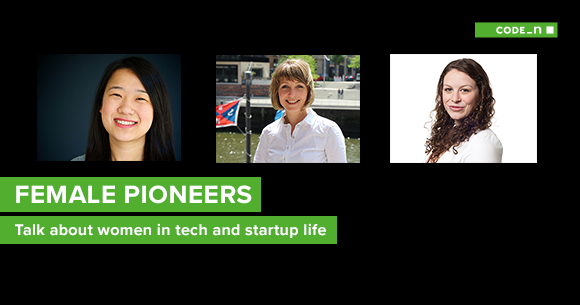 The Techcrunch media company recently stated that only 17% of venture-backed startups have female founders. And that’s not all: the number has stagnated over the last five years, implying that there’s still room for improvement when it comes to creating a more supportive environment. On the other hand, some progress has been made: There has been a rise in the number of angel investments targeted specifically at female founders. The aim here is to support women in realizing their own promising business ideas. Just one example: 37 Angels, a community of female investors, pulled together a list of resources of specific benefit to female founders.

An encouraging panel discussion from new.New Festival 2016 shed light on the female factor of digital disruption and how we could activate the immense wealth of slumbering talent and support diversity:

Reason enough for us to offer a glimpse into the stories of inspiring female role models. We’re also delighted that they’re part of the CODE_n community, as they open a window onto the views of women in business, innovation and technology. In part 1 we supply you with the point of view of Cathy Han (42 Technologies), Sina Gritzuhn (Hamburg Startups and StartupSpot) and Jennifer Indovina (Tenrehte Technologies, we recently published an inspiring founder interview on the CODE_n blog about Jen). Have a good read!

Cathy Han (founder and CEO of 42 Technologies, a big data platform focused on the retail industry): 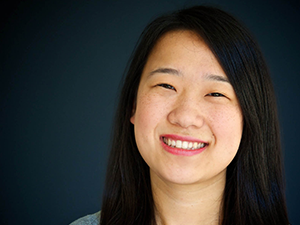 A women in tech and a CODE_n Alumnus since 2014: Canadian founder Cathy Han

“In my opinion, there are fewer girls studying computer science in the early stages of education, which I believe is the reason you see fewer examples of female founders from large well-known technology companies. Before, the technology industry was a field where degrees in computer science and knowing hardware were very helpful, and most of the time, necessary. Nowadays, the industry is more open to founders from all backgrounds. In addition, I believe that most female founders are more modest about communicating achievements, which might put them at a disadvantage when it comes to furthering their company or fundraising. To start, I believe that to get more women in technology, beginner’s guides are helpful in general. Startups are extremely challenging and it helps to have the right tools and mindset when going in. Also, it’s important to build and sustain an ecosystem with women in tech, but it will take time, so it’s important to build networks of female venture capitalists, founders, and customers. As a female founder working in enterprise software, one of the initial challenges is that I’m not perceived as the traditional “enterprise” person that big companies would choose to buy from. This also has to do with the fact that our company is young, but it has actually turned out to be an advantage because we stand out. We are able to implement and talk technology in a language that our more established competitors in the space aren’t familiar with. In terms of mentors, we’ve had both women and men who have helped us along in the different areas of the business. The real key is to find different people, each of whom is an expert in something and who can give you advice on areas of the business where you can learn and grow.”

Sina Gritzuhn (founder of Hamburg Startups and initiator of StartupSpot): 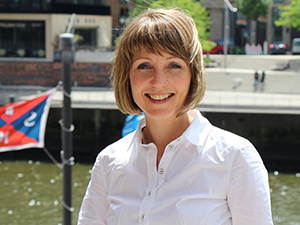 Passionate about the startup ecosystems in Germany: Sina Gritzuhn

“It’s important to have role models! The good thing about the startup ecosystem is that it’s permeable, by which I mean we can see what others have achieved. That fuels courage. We’ve also noticed that the topic of female founders is becoming more and more “mainstream.” You get less of the “Oh wow, you’ve got a woman in the team” reaction, and more of an understanding that a diverse team is actually good for startups. In fact, that’s something my female co-founder Sanja and I are noticing – sometimes we need a man 😉 I also think that digital transformation is making the field more democratic. Digital technology helps women achieve a balance between their family and a career. The solutions that are now available make it easier to implement your business models from home. These days, you can use something as simple as a free tool like Google Docs to set up a company! Ten years ago, that would’ve been inconceivable. All you need now is to summon up the courage to go for it. Something I continually remind myself of is that by nature women are more cautious than men when it comes to taking risks, and they check things twice before promising anything to the client, like delivering on a project. That’s not a bad thing really, in fact often it can even be advantageous in business terms.” 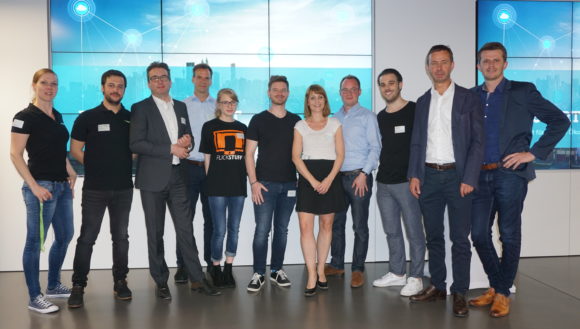 The launch of StartupSpot BaWü, the new startup relationship tool initiated by Sina Gritzuhn (middle), the founder of Hamburg Startups, was celebrated at CODE_n SPACES on May 17, 2017. Find all the details in the review article.

“I pitched to 50 VCs, I got 50 no’s. You can stop there or you can try to find another channel. Work with the team that you picked, that you trust, and try to find customers.” 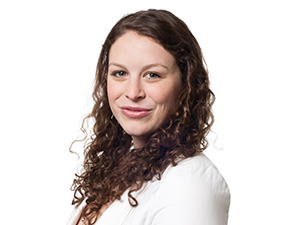 A woman with a strong entrepreneurial mindset: Jennifer Indovina is on a mission to save the world from energy waste

“I think one of the number one reasons is that female entrepreneurs today who have had success haven’t used the traditional financing channel for their startups. By that I mean the women who have been successful entrepreneurs – they haven’t killed themselves for years trying to pitch to the traditional VC’s, the venture capitalists and the banks that worked historically. They’ve gone out there and they’ve bootstrapped, they’ve gone and looked for customers. And if they found customers, they found success. I don’t want to be too generalizing with this statement, but I firmly believe that women who try to grow a business instead of trying to fund a startup will enjoy success. If women try the same tried-and-true method that worked for men for years to fundraise, going to pitch to guys in a boardroom, well, the statistics are, it’s not in your favor. I know because I did it! I pitched to 50 VCs, I got 50 no’s. You can stop there or you can try to find another channel. Work with the team that you picked, that you trust, and try to find customers. And when you do it that way, when you try to grow a business, I think you see these small incremental wins that will help you build the self-esteem that you need as a female entrepreneur – so then you’ll go and take more risks. And taking risks by being willing to take chances, that’s what it means to be an entrepreneur. And I believe that women have that ability. They have that ability to go out and take risks, make crazy choices, they have to just get out there and do it! I make it sound simple, of course it’s not, but I want to encourage women to follow their path. I think as time progresses we evolve socially and women are benefitting from that social evolution. They just have to basically not be afraid to fail, not be afraid when a man tells them “no” and keep moving forward.”

We thank the visionary women in the CODE_n community for sharing their experiences and viewpoints on the topic of female founders and women in tech! We’ll continue to shed light on this topic in part 2. So stay tuned for more inspiring stories on women who are pursuing their personal aims and doing their own thing.