Applications of augmented reality: What are the potentials for the manufacturing industry?

Augmented reality is not only the technology that made animations in football broadcasts and Pokémon GO possible. It is also the technology where global economy impact will grow, from under 5 in 2016 up to 29.5 billion dollars in 2019. Pretty impressive, isn’t it? This growth will also be due to adaptions of augmented reality in the manufacturing industry. Especially with the rise of industry 4.0, AR holds great potentials for improvements in workflow, monitoring and efficiency. We get to the heart of it and present to you the applications of augmented reality in the manufacturing industries. 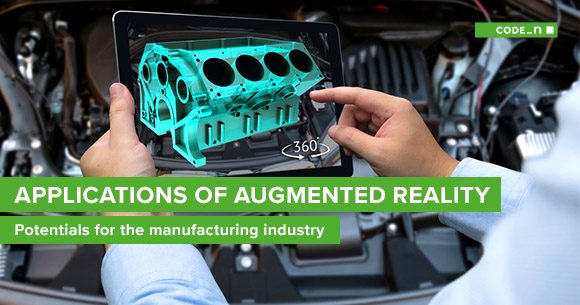 Augmented reality applications can increase efficiency in almost every area of operative work. Several cases and studies confirm an average productivity improvement of 32%. Sounds promising? Sure it does! Let’s take the assembly line as an example: Instead of reading long pages of instructions beforehand, workers can step right into the assembly process – aided by augmented reality glasses. While factories increasingly employ the latest smart, connected technologies, human workers remain central to factory performance – a fact which is perfectly represented in this scenario. Efficiently delivering information to workers that enhances their performance – for example by using these glasses – is crucial. These give them the instructions as they go, saving time, effort and error potential.

Still, it goes beyond assembling. CODE_n alumnus iTiZZiMO developed an augmented reality solution to simplify business processes. However, the development poses quite some challenges as Christopher Bouveret, CIO at iTiZZiMO, explains: “At iTiZZiMO, we have been working on AR and wearables for several years. We’ve been the very first company in the world with a fully integrated SAP solution for data guns in order-picking, where AR also plays a central role. The main challenge is represented by the advantages and disadvantages of the various hardware manufacturers and the suitability of certain wearables for industrial applications. In this context, central issues are the acceptance, ergonomics and wearing comfort as well as the performance of the different models, especially their suitability for AR use cases. To give an example: Google Glass or the Vuzix m100 / m300 are light and well-portable data gadgets, but not very suitable for AR use cases, when compared to ODG or Microsoft Hololens data gifs – although heavier and more ergonomic, but precisely designed for AR applications “. Have a look at iTiZZiMO´s video for an impressive augmented reality application in warehousing to check out how they mastered the mentioned challenges.

As you’ve seen in the video, augmented reality applications can tell workers and managers when a machine needs maintenance – before it causes damage. Even though AR has long shown potential when it comes to both entertainment and practical applications, them now including ways to help with specific repair and maintenance tasks pretty much is a blessing for every industry. Corresponding to this, inspections can be made easier as well. A solution for simplified inspection rounds comes from CODE_n alumnus Augmensys, who utilizes tablets or smartphones for their software. By this, the engineer holds a means for surveying, monitoring, auditing, and a guide all in one hand.

As mentioned already, augmented reality can also help with the repairing process itself. AR makes it possible to identify objects in a complex system via optical recognition or via geographical information – and that actually only takes a fraction of the time humans would have to invest. Knowing that, it is only a matter of course that diagnose and cure need to be supported by AR. Devices such as these glasses can give instructions and project work steps into the field of view or connect directly with an expert for support. The expert could be on another continent and would still be able to see what problem the person is working on, to point on things in the field of view, and to talk to them.

As advanced economies are trying to speed up growth, higher worker skills are more required than ever. College education may be part of the solution, but increasing the proportion of college-educated people in the workforce will take time we don’t have. So, why not take it to the next level? Job training programs are faster, especially when supported by AR. Training by augmented reality is similar to the potentials described for maintenance. Imagine that the AR glasses can not only show trainees the steps they need in order to complete a task, but also signal, if something is done wrong – interactively and in real-time! This was made possible by CODE_n alumnus ioxp. Their software solution offers great potentials for training and motivation of employees.

Knowing that, we are now prepared to confidentially take the next steps into an augmented reality based future. Want to give it some more space in your mindset? In that case, check out some related articles to further expand your horizon in all matters of AR:

Trends and new applications of photonics: changing the game in mobility and manufacturing